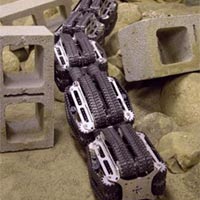 A virtually unstoppable 'snakebot' developed by a University of Michigan team resembles a high-tech slinky as it climbs pipes and stairs, rolls over rough terrain and  spans wide gaps to reach the other side.

The 26-pound robot developed at the U-M College of Engineering is called OmniTread. It moves by rolling, log-style, or by lifting its head or tail, inchworm-like, and muscling itself forward. The robot's unique tread design prevents it from stalling on rough ground, said research professor Johann Borenstein, head of the mobile robotics lab at U-M.

The snake-shaped serpentine robot is propelled along by moving treads that cover 80 percent of its body. These treads prevent the snakebot from stalling or becoming stuck on rough terrain because the treads propel the robot forward like a tire touching a road. Historically, scientists haven't had much success with wheeled and tracked robots on rough terrain because they constantly stall.

A human operator controls the snakebot via a joystick and umbilical cord, which also provides electric power, which sends commands to specially designed software. A smaller, but more self-contained version that is now under development will carry on-board power for one hour of tetherless operation.

The OmniTread is divided into five box-shaped segments connected through the middle by a long drive shaft spine that drives the tracks of all segments. Bellows in the joints connecting the sections inflate or deflate to make the robot turn or lift the segments. The bellows provide enough torque for the OmniTread to lift the two front or rear segments to climb objects.

In one test, the OmniTread climbed an 18-inch curb, which is more than twice its height. It also crossed a 66-centimeter trench, which is half its length. In another test, it inched up a pipe by pushing against opposite walls.

The robot is ideal for hazardous inspections or surveillance in industrial or military applications Borenstein said. The research appears in the March 18 edition of the International Journal on Industrial Robots, in a special  issue on mobile robots. The paper, 'The OmniTread Serpentine Robot for Industrial Inspection and Surveillance,'  was written by Borenstein and co-authors Malik Hansen and Grzegorz Granosik.

For a web video of OmniTread, click on video clip: http://www.engin.umich.edu/research/mrl/00MoRob_6.html

For information on Borenstein and the Mobile Robotics Lab, visit: http://www-personal.engin.umich.edu/~johannb/