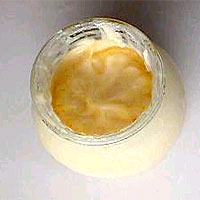 Mayonnaise: food or physics laboratory in a jar?

Scientists at Rice University have discovered that a little-understood tensile force, which was previously thought to be an oddity found only in the types of plastics used to make bulletproof vests, occurs in everyday emulsions like mayonnaise and salad dressing.

First identified about 25 years ago, the phenomenon known as "negative first normal stress difference" refers to an attractive force that is created within fluids under certain conditions.

For example, imagine two glass plates that are stacked like a sandwich, with a thin layer of liquid between. If the bottom plate is held still and the top plate is moved quickly to one side, it sets the fluid in motion, and creates forces within the fluid that, in turn, act upon the glass.

In simple fluids like water, this sliding motion creates complementary forces that tend to push the plate along in the direction that it was sliding. In more complex fluids like polymers, tension develops, creating forces that tend to push the plates apart. Around 1980, it was discovered that liquid crystalline polymers —the chief ingredients in ultrastrong fibers like Kevlar® and Zylon® — created forces that tugged the plates together. This force is referred to as "negative normal stress," as opposed to the more common positive forces that push plates apart.

Last year, Matteo Pasquali, assistant professor of chemical engineering, and colleague professors and graduate students at Rice were trying to create a strong fiber of pure carbon nanotubes. The researchers were attempting to adapt the methods DuPont had pioneered in the creation of Kevlar, and they ended up with a solution of nanotubes that behaved like a liquid crystalline polymer. The solution exhibited negative normal stress, which was a confirmation that the nanotubes had made a liquid crystal.

At about the same time, Pasquali and graduate students Alberto Montesi and Alejandro Peña were testing emulsions of oil and water. Emulsions are combinations of two or more liquids that do not mix, and they are common in industrial settings like oil fields as well as in everyday foodstuffs like mayonnaise or vinaigrette salad dressing. In oil and water, an emulsion is created when tiny droplets of water become dispersed throughout the oil.

Pasquali, Montesi and Peña found that negative normal stress was present in their oil and water emulsions when the concentration of water droplets was in a specific range. The research was published last month in the academic journal Physical Review Letters.

"When I first saw the data, I thought we had made a mistake," said Pasquali. "My students and I joked that we must be the only lab that had ever had negative normal stresses on two systems. However, we double- and triple-checked, and the effect was still there.

"Then, we heard that Erik Hobbie’s group at the National Institute for Standards and Technology was getting similar results with suspensions of carbon nanotubes. A collaboration ensued and we all began to feel more certain that the findings — though unusual — were correct."

The startling results led Pasquali’s group to expand its experiments to some commonplace emulsions.

"I went to the store, bought a jar of mayonnaise and tested it," said Montesi. "I was curious to see if it showed the same negative normal stress, and it did."

The findings clearly open the door to future studies about the underlying phenomena behind negative normal stress.

"This finding opens interesting research and development opportunities," said Peña, now a senior research engineer at Schlumberger. "A better understanding of the phenomena that underlay the onset of negative normal stresses — the interplay between the tendency of droplets to form collective structures at the microscopic level and the macroscopic behavior of emulsions in flow — will lead to novel developments in the formulation of emulsions and other dispersed systems of practical relevance such as suspensions of solids and foams."

Pasquali added that more study is needed before practical applications will become apparent.

"It’s really too early to foresee the full range of useful applications that might arise from this new understanding of negative normal stress," said Pasquali. "Obviously, any application where there are mixtures of oil and water — like petroleum production, food processing and the like — could be candidates."