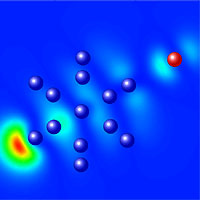 A stable cluster of aluminum atoms, Al13, acts as a single entity in chemical reactions, demonstrating properties similar to those of a halogen, reports a research team led by A. Welford Castleman Jr., the Evan Pugh Professor of Chemistry and Physics and the Eberly Family Distinguished Chair in Science at Penn State, in a paper to be published in the 2 April 2004 issue of the journal Science. Experimental results and theoretical calculations indicate that the cluster chemically resembles a "superhalogen" atom, retaining its properties during the reaction and in reaction products. Other team members include Denis E. Bergeron of the Penn State departments of chemistry and physics and Shiv N. Khanna of the Virginia Commonwealth University department of Physics. One implication of the research is the possibility of using such clusters as building blocks in nanoscale fabrication.

The project focused on experimental evidence of the existence of a very stable cluster anion, Al13I-, prepared by the gas-phase reaction of aluminum clusters with HI gas. Mass spectrometric analysis indicated that the reaction produced relatively few products, the most abundant corresponding to Al13I-. Energy calculations to determine the bonding mechanism between the aluminum cluster and the iodine atom indicate that the extra electron is localized on the Al13 cluster, meaning that the cluster maintains its integrity throughout the reaction. Because the cluster has a greater electron affinity in the compound, or attraction to the free electron, than does iodine, it can be considered a "superhalogen."

"One of the themes of our research is using the clusters as building blocks for new nanoscale materials," says Castleman. "In many cases, people have worked from the top down; that is, subdividing matter to get it smaller and smaller. We're trying to work with atoms and molecules and put them together--working our way from the bottom up. If we can retain the properties of aggregates, as we put them together, perhaps we will be able to construct new nanoscale materials." The key to using the aggregates as building blocks is that they retain their individual properties during the reaction and do not coalesce into a large aggregate.

One goal of the research is to test the Jellium model of stable clusters, which treats metal atoms in a small system as positive cores surrounded by the valence electrons. The model predicts certain closed-shell arrangements with high stability, called magic clusters. In the Jellium model, the cluster's atomic nuclei and inner electrons are seen as a single, spherical, positively charged core, surrounded by valence electrons in electronic shells similar to those of atoms. Essentially, the magic clusters can be viewed as superatoms, capable of forming compounds.

"When we started looking at reactions, Al13 turned out to be a very interesting species for several reasons, " says Castleman. "It behaves very much like a halogen, somewhere between iodine and bromine the way it wants to bind an electron. If we could put an iodine atom in contact with Al133, the Al13 has a little higher electron affinity than iodine, which could allow the Al13 to retain the electron, thereby bonding the Al133 and I together."

Experimental observations indicated that the stability of the Al13I- ion is comparable to that of BrI-, a well-known and very stable molecular halogen ion. The ability of a cluster of aluminum atoms to behave like a halogen opens up the prospect that Al13 and other magic clusters can retain their properties as a building block for assembling new materials.

"This superhalogen is not disrupted even in the presence of the very reactive iodine atom in close proximity, but still keeps its properties," says Castleman. "Now that we have shown that this is possible, we see potential ways to make other clusters, maybe involving other metals or alloys. It should be possible to construct something in the Jellium framework that would have the properties not only of a halogen, but of other types of atoms as well. For example, the Al13- ion itself resembles a rare gas atom because it is so unreactive. Ideally, we could have a whole series of clusters--a 'three dimensional' periodic table, not of elements but rather of clusters simulating the properties of the elements." The goal is to use these clusters as building blocks to tailor the design and formation of nanoscale materials with selected properties.

This research was supported by the U. S. Air Force Office of Scientific Research and the U. S. Department of Energy.