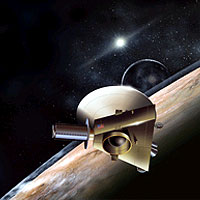 The Johns Hopkins University Applied Physics Laboratory will design, build and operate the New Horizons spacecraft, seen here in an artist's concept. The craft's miniature cameras, radio science experiment, ultraviolet and infrared spectrometers and space plasma experiments will characterize the global geology and geomorphology of Pluto and Charon, map their surface compositions and temperatures, and examine Pluto’s atmosphere in detail. The spacecraft’s most prominent design feature is an 8-foot (2.5-meter) dish antenna, through which it will communicate with Earth from as far as 4.7 billion miles (7.5 billion kilometers) away.

The solar system's farthest known planetary outpost is closer to getting its first visitor. This week, NASA gave The Johns Hopkins University Applied Physics Laboratory, Southwest Research Institute and their partners the go-ahead to start full development of the first mission to Pluto and the Kuiper Belt.

The New Horizons spacecraft is scheduled to launch in January 2006, swing past Jupiter for a gravity boost and scientific studies in 2007, and reach Pluto and its moon, Charon, as early as summer 2015. The arrival date depends on the launch vehicle NASA selects for the mission this summer -- either a Boeing Delta 4 or Lockheed Martin Atlas 5.

After a six-month encounter with Pluto-Charon -- during which New Horizons will characterize Pluto's and Charon's global geology and geomorphology, map their surface compositions and temperatures, and examine Pluto's complex atmosphere -- the spacecraft will head deeper into the Kuiper Belt to study one or more of the icy mini-worlds in that vast region, at least a billion miles beyond Neptune's orbit.

"We've designed the mission, the spacecraft and the instruments, and we're ready to start cutting metal," says New Horizons Project Manager Thomas Coughlin, of the Applied Physics Laboratory (APL), Laurel, Md. "This is the time in a mission when things really start rolling toward launch. We have less than three years to go and there is a lot to do between now and then -- and we're excited to get moving on it."

APL manages the mission for NASA and will design, build and operate the New Horizons spacecraft. Dr. Alan Stern, director of the Southwest Research Institute's Department of Space Studies in Boulder, Colo., is the mission's principal investigator and leads an unprecedented science effort. "This is exploration at its greatest, as only the U.S. space program can do," Stern says. "New Horizons will reconnoiter the great, unexplored 'third zone' of our solar system and make a historic flyby of the outermost known planet."

NASA tapped the APL-SwRI team to conduct its Pluto-Kuiper Belt mission in November 2001, and preliminary design work began in January 2002.

Assembly has already started on New Horizons' scientific instruments and the team will begin fabricating parts of the spacecraft's structure next month. Baseline plans for the New Horizons mission include use of a radioisotope thermoelectric generator (RTG), which could supply over 200 watts of electrical power for the spacecraft. The mission's next major milestone is a critical design review in early August; if that goes as expected, spacecraft integration and testing would begin in May 2004.

That date will come two months after the scheduled launch of another APL spacecraft - the MErcury Surface, Space ENvironment, GEochemistry, and Ranging (MESSENGER) satellite -- which is set to become the first spacecraft to orbit Mercury. MESSENGER, now under construction at APL, will launch aboard a Delta 2 rocket from Cape Canaveral Air Force Station, Fla., in March 2004 and begin a yearlong orbit study of Mercury in April 2009.

"We have the unique opportunity to complete the exploration of the planets, while traveling to the solar system's extremes," says Dr. Stamatios Krimigis, head of the APL Space Department. "Before the end of the decade we are going to visit the largely unexplored innermost planet, where surface temperatures are near 845 degrees Fahrenheit, and the thermal environment for our spacecraft will be rather demanding. And we're leading a mission to the outermost planet, where estimated temperatures are minus 390 degrees Fahrenheit. It's an incredible challenge and a chance to make history."

For more information on the New Horizons mission, visit http://pluto.jhuapl.edu

For more information on the MESSENGER mission -- including live Webcam images of MESSENGER's construction -- visit http://messenger.jhuapl.edu

The Applied Physics Laboratory, a division of The Johns Hopkins University, meets critical national challenges through the innovative application of science and technology. For more information, visit http://www.jhuapl.edu

News Story Origin and Copyright: JHU-APL
Click here for the original news release.
'Every creative act involves ... a new innocence of perception, liberated from the cataract of accepted belief.'