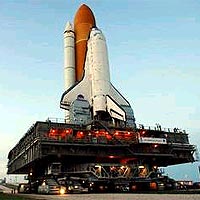 In the waning twilight, the service structures on Launch Pad 39B and the Mobile Launcher Platform carrying Space Shuttle Discovery glow with lights at NASA's Kennedy Space Center. Credit: NASA/KSC

Space Shuttle Discovery has taken one long crawl to its oceanfront launch pad and one momentous step toward a safe Return to Flight. Its long-awaited rollout from the Vehicle Assembly Building (VAB) to Launch Pad 39B began at 2:04 p.m. EDT today at NASA's Kennedy Space Center in Florida.

'We've been working so hard,' explained Launch Director Mike Leinbach. 'We haven't seen a Shuttle in the light of day in two and a half years, almost.'

By 9 a.m., the paneled doors of the 52-story VAB opened in anticipation of the rollout. The Space Shuttle began inching out of the VAB on a massive Crawler Transporter in the early afternoon, with Discovery's orange External Tank and twin white Solid Rocket Boosters vivid against the blue sky.

Crowds of Kennedy employees gathered in nearby parking lots to share their excitement as the towering assembly crept down the 130-foot-wide Crawlerway at barely one mile an hour.

Originally scheduled for noon, the Space Shuttle's movement was briefly delayed due to minor technical issues that needed to be resolved, as well as a meticulous safety walkdown of the vehicle and Crawler Transporter.

Space Shuttle Discovery made the 4.2-mile journey in just over 10 hours, arriving at the pad at about midnight, long after darkness had fallen across the Kennedy landscape.

Discovery's arrival at the pad is the culmination of more than two years of modifications and safety upgrades to the Space Shuttle's orbiter and External Tank. The Shuttle's next move is the most important: a safe liftoff, currently targeted between May 15 and June 3.

In the meantime, Shuttle workers will stay busy with final prelaunch preparations. The External Tank will be loaded with cryogenic propellants during a mid-April tanking test. Later this month, Discovery's payload -- the Multi-Purpose Logistics Module Raffaello -- will be installed into the orbiter's payload bay and the flight crew will participate in a full dress rehearsal called the Terminal Countdown Demonstration Test.

But for now, NASA officials and employees are thrilled to see a Space Shuttle in position for liftoff, heralding the start of a new era in space flight.