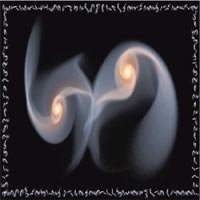 The swirling galaxies creep towards each other until their bright epicentres collide, sending ribbons of light into the blackness. It is both a beautiful and awesome image -- hard to believe that somewhere in the universe a similar event is unfolding.

Not in a matter of minutes, mind you, but over billions of years. Professor John Dubinski of astronomy has condensed and animated the spectacular collision to music, with the help of Toronto-composer John Farah. “My scientific research is based on numerical simulations of galaxy dynamics and structure formation. I’ve developed complementary animation software so people can experience the complex dynamical evolution of galaxies,” Dubinski said. “Adding music enhances the experience.”

The European Space Agency took notice of the Dubinski-Farah collaboration last fall and is including it in the DVD documentary of the 15th anniversary of the Hubble space telescope, due out at the end of April. The documentary will present the history and many achievements of the Hubble. It will also include incredible imagery and computer animations of astrophysical phenomena.

'[The ESA] saw my website and liked the stuff I was doing, so I sent them some of the work in progress that I was doing with John,' Dubinski said. 'They liked the animations and the music and so are incorporating them into the main narrative of the documentary. They're also including five tracks in a bonus section on the DVD.'

Dubinski heard of Farah’s experimental music through a friend and approached the composer with the idea of putting galactic formation to music. Farah said the big challenge was to find musical common ground between the two of them. “I wanted something ultra-serious and he wanted something more light to make it more accessible to everyone,” said Farah, who graduated from the Faculty of Music in 1996. “The images are quite poetic and it was important to find the right rhythm so that the music lent itself to the narrative.”

Working with a limited budget, the ESA public outreach arm will distribute the DVD to science media; the media will then take on the cost of reproducing the DVD and include it as an insert for their readers.

While some may view this artistic collaboration as strange for an astronomy professor, Dubinski sees it as a natural extension of his scientific research.

“Scientists and musicians are very similar kinds of people -- they're both creating things from the synthesis of ideas using some acquired technological expertise,” said Dubinski, who's done similar work for National Geographic and Japanese public television. “Computer simulations represent physical reality but have no constraints on time or space, making it possible to choreograph galaxies and set them to music if you please.”

Farah agreed that art and science overlap: “Music is math. Music can underscore the deeper poetic truths that exist in nature and reflect something of natural formation.”

News Story Origin and Copyright: UToronto
Click here for the original news release.
'The mathematician's patterns, like the painter's or the poets, must be beautiful; the ideas, like the colours or the words, must fit together in a harmonious way. Beauty is the first test: there is no permanent place in the world for ugly mathematics.'