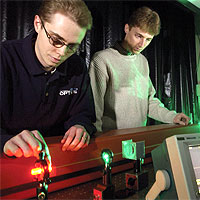 Though Einstein put his foot down and demanded that nothing can move faster than light, a new device developed at the University of Rochester may let you outpace a beam by putting your foot down on the gas pedal. At 127 miles per hour, the light in the new device travels more than 5 million times slower than normal as it passes through a ruby just a few centimeters long.

Instead of the complex, room-filling mechanisms previously used to slow light, the new apparatus is small and, in the words of its creator, "ridiculously easy to implement." Such a simple design will likely pave the way for slow light, as it is called, to move from a physical curiosity to a useful telecommunications tool. The research is being published in this week's Physical Review Letters.

The new technique uses a laser to "punch a hole" in the absorption spectrum of a common ruby at room temperature, and a second laser shines through that hole at the greatly reduced speed. A recent successful attempt to slow light to these speeds used a Bose-Einstein condensate (BEC), a state of matter existing 459 degrees below zero Fahrenheit where all atoms act in unison like a single, giant atom. The laser shining through the BEC was slowed to 38 miles per hour, but the system had enormous drawbacks, not the least of which was that the equipment needed to create the BEC wouldn't fit in the average living room, and the created BEC itself was little bigger than the head of a pin.

"If that was the world's hardest way to slow down light, then what we've found is the world's easiest way to do it," says Robert Boyd, the M. Parker Givens Professor of Optics at the University. "We can slow light just as much in a space the size of a desktop computer."

Slowing light, at least a little, isn't as difficult as it may seem. Light passing through a window is 1.5 times slower while moving through the glass, and is slowed slightly less so when passing through water. But to achieve the 5.3-million fold slowdown, Boyd and his team, students Matthew Bigelow and Nick Lepeshkin, used a quantum quirk called "coherent population oscillations" to create a special gap in the frequencies of light that a ruby absorbs. Rubies are red because they absorb most of the blue and green light that strikes them. Shining an intense green laser at the ruby partially saturates the chromium ions that give ruby its red color. They then shine a second beam, called the probe laser, into the ruby. The probe beam has a frequency slightly different than the first laser, and these offset frequencies interact with each other, causing variations the same way two ripples encountering each other on a pond might create waves higher and lower than either one had alone. The chromium ions respond to this new frequency of rhythmic highs and lows by oscillating in sympathy. One consequence of this oscillation is that it allows the probe laser to pass through the ruby, even though the laser is green, but it only allows it to pass 5.3 million times more slowly than light would otherwise travel.

Boyd anticipates that the slow light device will find a role in the telecommunications industry. When two signals from fiber optic lines merge, the two signals may reach the merging router at the exact same moment and need to be separated slightly in time so they can be laid down one after another. Like two cars merging on a highway where one may need to slow down to let another car into the lane, a light-slowing device could help ease congestion on fiber optic lines and simplify the process of merging signals on busy networks.

One drawback to the new technique is currently being scrutinized by Boyd and his coworkers-the duration of the pulses of light that it delays are very long. The BEC experiments were able to delay a short pulse, which meant that a plain pulse of light and a slowed pulse would differ by several times the pulses' lengths. The Boyd technique slows light by roughly the same amount as the BEC method, but since the pulses are much larger, the delay is only a fraction of the pulses' size. It would be the difference between slowing an economy car a few feet to let another economy car merge, and a double-tractor trailer slowing only a few feet and expecting another double trailer to merge into the gap. Boyd suspects that different materials may yield slowed light that can transmit shorter pulses that would be more useful for telecommunications work.