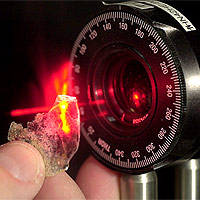 Cliff Johnston uses a laser to look at a clay particle in his Purdue University lab. The laser helps Johnston study the structure and orientation of the clay. This particular layer is approximately 1 million times the thickness of the one nanometer-thick layer researchers recently developed. (Purdue Agricultural Communications photo/Tom Campbell)

An ultrathin film containing 1-nanometer thick clay particles has been created for the first time, an accomplishment that may yield new materials and devices for medicine, electronics and engineering, according to Purdue University and Belgian scientists.

Using a method that captures clay particles on a crystal, Purdue and Katholieke Universiteit Leuven research partners were able to produce, see and manipulate a single layer of clay. It would take 70,000 of these layers to equal the thickness of a human hair. The thickness of one clay particle is about 1 nanometer, and being able to see one of these layers is equivalent to standing on Earth and being able to see footprints on the moon.

The researchers' joint findings will be reported in the May 27 issue of the journal Langmuir, a publication of the American Chemical Society. The report is currently on the publication's Web site .

"Once you can control and manipulate nano-sized clay particles, then you have the ability to create smart materials by combining the structural support provided by the clay with the functionality of organic molecules, such as dye, enzymes, proteins and polymers," said Cliff Johnston, Purdue professor of agronomy and an environmental chemist. "That allows us to build the clay and the organic molecules into more complex structures."

This could lead to development of sensors to more quickly detect biological and chemical agents, the creation of stronger plastics and other materials, such as self-sealing substances for use on spacecraft.

"When we use an ultrathin hybrid film to make a device, such as a sensor, it will respond faster than a larger device," said Johnston, who also is a researcher with the Birck Nanotechnology Center in Purdue's Discovery Park.

Clay minerals already have a variety of uses in products such as nanocomposites, vaccines, catalysts and plastics. In these materials, the clay particles consist of many layers.

Creating a film that has a single layer of clay allows researchers to work with the mineral in new ways. Because clay behaves differently when it's in bulk form composed of numerous layers, its value multiplies in a single-layer form, Johnston said.

"We're interested in making clay particles smart materials by combining them with functional organic molecules to form hybrid materials," he said. "By doing this, we open a whole spectrum of materials we can develop so they will respond in a particular way in a particular environment.

"It could be a dye molecule that is one color in the presence of a particular contaminant or is sensitive to a change in pH or to a whole range of different things."

Clay particles can provide a semirigid structure or template for organic molecules, Johnston said. By combining other materials, scientists can develop new hybrid materials that are malleable and respond in a particular way.

For instance, clay minerals are currently used to create plastics that are significantly lighter, stronger and more elastic than those without clay. In these materials, the clay minerals are present in multiple layers, Johnston said. This adds stability to the plastic; it melts at a higher temperature; it's stronger. However, there is limited control over how bulk, multilayer clay and another substance mix.

"Mixing bulk forms of clay is not the same as working with an individual layer, which allows you to manipulate it and to place it where you want it," he said.

In order to produce, directly see and work with a single layer of clay, Johnston and Katholieke Universiteit Leuven colleagues started with a technique called a Langmuir-Blodgett Balance. This involved putting clay particles into water and then adding insoluble organic molecules that have a positively charged tip. As the organic molecules float on the water surface, they attract and bind to the negatively charged clay.

The researchers used a Langmuir trough to force these combined particles into a line. This is akin to ping-pong balls floating in a pool of water and then compressing the water so all the balls are together, Johnston said. Next the scientists inserted a crystal into the water that would attract floating molecules. When the crystal was pulled out of the water, the molecules coated its surface, forming a film.

In order to detect the single layer of clay film, the scientists used infrared techniques, effective because clays absorb infrared light. They then used an atomic force microscope to see the hybrid film.

The investigators plan to continue their research by exploring different ways of making the hybrid films and the types of functionality that can be added or built into the films.