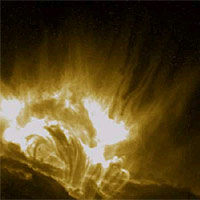 Solar tadpoles swim back to the Sun during the April 21, 2002 coronal mass ejection imaged by NASA's TRACE spacecraft. Super: NASA.

If you’ve ever been in a blackout in perfect weather, or had your cellular phone die for no apparent reason, you may have experienced the impact of huge explosions on the Sun’s surface. Obviously, scientists would like to be able to predict these explosions in order to avoid disruptions on Earth. They may soon get a lot closer to this goal, thanks to insights from so-called solar tadpoles.

Every so often, and with increasing frequency up to once or twice a day during the peak of the solar cycle, portions of the outer layer of our Sun erupt. The largest of these solar flares, the X-class, can each send energy into space up to the equivalent of a billion one-megaton nuclear bombs. Their sometime-companion coronal mass ejections (CMEs) shoot megatons of electrified gas (plasma) into space as well. Flares can interfere with radio communications as quickly as eight minutes after eruption. Reaching Earth three or four days after the solar eruption, highly energized particles from CMEs disrupt satellite signals and power grids, potentially for hours or days at a time.

With such a powerful discharge, scientists were surprised to find material actually heading back towards the Sun. The material moved fast, too: starting at anywhere from about 20 to almost 400 miles each second. The rippling, burrowing appearance of the Earth-sized phenomena prompted the moniker solar ‘tadpoles.’

Scientists hope tadpoles will help shed light on the phenomenon known as magnetic reconnection. "Improved understanding of magnetic reconnection will help us better understand when a highly-magnetized region of the Sun will suddenly erupt as a flare or CME," says Dr. Edward Deluca of the Harvard-Smithsonian Astrophysical Observatory (SAO), Cambridge, Mass. Deluca is a co-author of a paper on an observation of the tadpoles which will be submitted to the Astrophysical Journal in September 2003. The results also will be detailed in a poster presentation at the American Geophysical Union meeting in Nice, France, April 7-11, 2003.

Several satellites with differing imaging capabilities simultaneously captured an X-class solar flare and its associated CME on April 21, 2002, instigator of some space weather events on Earth. The observation marked the first sighting of the tadpoles by NASA’s high-resolution Transition Region and Coronal Explorer (TRACE) satellite, offering researchers the highest-resolution image yet of these dark tadpoles. Researchers first noticed tadpoles in January 1999, and they examined stored data to discover that other satellites have detected the tadpoles in about 40 other events dating back to 1991. The tadpoles appear in roughly 20 percent of CME-related flares.

To clarify the role of tadpoles in magnetic reconnection, first the scientists had to decide among several theories of the exact nature of these dark features. One big question concerned temperature – are tadpoles hot or not? They could be very cool, extremely dense regions of plasma in the solar atmosphere that give off a different kind of light than what TRACE detects, and in fact block or absorb the ultraviolet light from hot plasma behind them. If this were true, their fall toward the Sun would be due to gravity acting on the tadpoles’ greater density than that of the surrounding hot plasma. However, observations from other satellites seem to rule this out, says Deluca. "The Ultraviolet Coronagraph Spectrometer (UVCS) spacecraft is very sensitive to cooler material, but the tadpoles don't appear in UVCS images of flares when other instruments see them."

That piece of the puzzle, along with the tadpoles’ appearance in the Soft X-RayTelescope (SXT) aboard Japan’s Yohkoh spacecraft and TRACE satellite images, leads scientists to believe the tadpoles are superheated. TRACE observes ultraviolet light from iron atoms in solar plasma at 2.7 million and 18 million degrees Fahrenheit.

As hot objects normally give off some energy as light as well as heat, the darkness of the tadpoles suggest that there is very little matter present in the tadpoles, making it a superheated magnetic void. No matter means no ultraviolet radiation; the heat comes from the invisible electrical energy generated by the magnetic fields. The actual temperature of the voids escapes scientists for the moment, for as McKenzie notes, "[W]e get the temperature by comparing the brightness in two different filters and they're *dark* no matter how we look at them. Asking the temperature of something dark is like asking the color of something you can't see. (Yes, very Zen, but also very unhelpful.)"

For the moment, the shape of the magnetized region still stumps scientists, too: the tadpoles could be irregular blobs, or, alternatively, tubes of magnetic fields seen in cross section, the currently reigning theory. The tubes, given shape by the pressure of the magnetic field keeping the plasma out, lose shape and disappear as hot plasma slowly refills the void. Magnetic reconnection theory so far predicts the tube shape, but not the plasma void.

Where do these tadpoles come from?

The outer layer of the Sun, made of electrified gas, or plasma, is constantly in motion, like a pot of boiling water. The electricity in this plasma generates magnetic fields, which twist and turn and stretch and strain as the plasma rolls around. Scientists think that given enough stress, the magnetic fields in this outer atmosphere (corona) break apart, causing a solar flare and/or a coronal mass ejection. Broken fields attached to the solar surface reconnect and tadpoles result. The rejoined fields snap back to the solar surface, leaving a magnetized void in the plasma, the tadpole.

Dr. David McKenzie of Montana State University – Bozeman, who has observed these features many times before using the SXT, likens the action of the solar surface magnetic fields to tethers of a hot air balloon. "Imagine a hot-air balloon lifting off the ground and stretching elastic tethers placed over its top," says McKenzie. "The tethers are like the solar magnetic field, and the balloon represents the CME. As the balloon rises, the elastic tethers stretch, get pulled together, and start to tangle underneath the balloon. If the tethers were to behave like solar magnetic fields, instead of simply breaking, broken tethers would reconnect to other broken tethers, forming new connections (magnetic reconnection)."

"If this tangling and reconnection goes on long enough, pieces of elastic tethers that are connected to the ground (the solar surface) connect to other "grounded" segments, and subsequently snap back down to the ground. They carry the magnetic voids (tadpoles) down with them, and form long rows of arches called arcades. Pieces connected to the balloon get tied to other "balloon-connected" segments and are carried off as magnetic fields embedded in the CME."

So what can we do about it?

As of yet, scientists cannot predict when solar flares or CMEs will happen. Improved understanding of magnetic reconnection will help, but for now, we can only watch the Sun for an eruption, and take action when we see an event. Flares rise as much as 60,000 miles above the surface, lasting only minutes, or perhaps hours. They generate X-rays that strike Earth’s outer atmosphere, the ionosphere. These X-rays increase the number of electrons in the atmosphere, resulting not only in radio interference, but also in low-frequency electrical noise just outside the spectrum that an AM radio picks up. Amateurs can make receivers that pick up such low frequencies and thus "hear" solar flares.

For now, scientists can only turn off satellites and power grids to prevent electrical damage from the incoming particles. They lose a little data or service in the process but save the satellite or grid in the long run. Power grid shut off requires more personnel, which proves tricky with current short-notice events if a crew is on vacation, for example. Better understanding of solar activity could lead to longer-range predictive abilities and more protection.