Students to Board NASA's 'Vomit Comet' 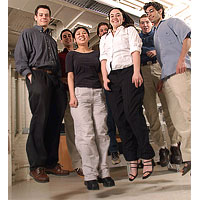 Before leaving for Houston, members of the Johns Hopkins STILLMix team got a jump on their training for this week's NASA flight, during which they'll use periods of microgravity to conduct surface tension experiments. Photo by Will Kirk

Most students can only imagine what it feels like for an astronaut to conduct scientific research while floating freely inside a spacecraft. This week, for four Johns Hopkins undergraduates, that fantasy is set to become a reality.

Flying in a NASA jet that produces brief periods of weightlessness, the students will get a small taste of space-travel sensations. They'll have to keep their feet on the ground at least figuratively, however, because these periods of microgravity will occur while they're conducting experiments to learn how liquids mix on a surface when gravity is not a factor. Their research could lead to more efficient ways to combine or move fluids aboard space shuttles and the International Space Station.

The team of seven students -- four fliers and three ground crew members -- left for Houston on April 8 to undergo several days of NASA training. This week, four of the students expect to take part in two days of experiments aboard a KC-135 aircraft that is sometimes referred to as the "weightless wonder." The jet has also been dubbed the "vomit comet" because it induces motion sickness in some passengers. "A lot of people have said this project is so cool, but that's the one thing to be nervous about," said Paul Nerenberg, one of the student team members.

By flying in a parabolic path, the NASA jet can create periods of microgravity lasting up to 23 seconds, simulating conditions in outer space. The team's faculty adviser, Cila Herman, a professor of mechanical engineering, is quick to point out that "this is not just an opportunity for the students to have fun pretending to be astronauts. They are going to be conducting some serious science experiments." Herman, who completed her own microgravity tests aboard a KC-135 in 1999, advised the students to eat a light dinner the night before their flight, to skip breakfast the next morning -- "if they can survive without it" -- and to take their motion sickness pills.

The microgravity flights will mark the culmination of a process that began months ago when the students prepared a research proposal and submitted it to NASA's Reduced Gravity Students Flight Opportunities Program. The project was named Surface Tension Impelled Low-Gravity Liquid Mixing Experiment, or STILLMix for short. "We want to learn how surface tension affects the mixing and spreading of liquids on a surface without gravity's interference," said Paul Gosling, a physics major who serves as team leader. "Driven mixing on surfaces is something we don't really know much about. On Earth, gravity is a muddling and dominating force when you're trying to study it."

To study how liquids move and mix on a surface when gravity is nearly gone, the students designed and assembled a test rack equipped with 18 pairs of syringes, each with curved tips facing one another. During each period of microgravity, the students will squeeze a set of syringes, sending two liquids toward each other atop a plate made of aluminum, which encourages fast spreading. On some of the plates, however, the students have attached strips of Teflon tape, which is more resistant to spreading liquids. By setting up a zipper-like pattern with the tape, the students hope to learn whether this jagged shape encourages more mixing than a smooth head-on meeting of the fluids.

Four liquids in various combinations will be tested: water, silicone oil, ethyl alcohol and minimal essential medium. Each liquid will be dyed to make its behavior easier to see. Each test will be taped by a digital video camera mounted on the frame, to allow a closer analysis after the aircraft returns to Earth. The students hope to perform 18 experiments on each of the two flights.

Learning more about how liquids mix and spread on a surface in weightless conditions is important, the students said, because moving fluids aboard a spacecraft by mechanical devices requires power, which must be conserved as much as possible in space. In addition, the students' research may shed light on whether astronauts could manufacture their own spare parts in space through a plastic injection molding process.

Along with Gosling, a senior from San Jose, Calif., and Nerenberg, a junior physics major from Los Angeles, two other students are slated to carry out the experiments on board the NASA aircraft: Henry Mowry Cook III, a junior from Cheyenne, Wyo., majoring in physics and engineering mechanics, and Mike Sharma, a junior from Wilmington, N.C., majoring in mechanical engineering.

Although NASA did not require the students to pay for their microgravity flights, the team members did have to raise funds for their experimental equipment, travel and lodging. In this effort, the team received assistance from Lani Hummel and Kuria Gecau in the Whiting School of Engineering's Office of Industrial Initiatives. The project received financial support from the Whiting School, the Krieger School of Arts and Sciences, Kathleen Sharma of the Blue Heaven Bed and Breakfast, the Maryland Space Grant Consortium, the National Office of the Society of Physics Students, Northrop Grumman and William and Dorothy Nerenberg.