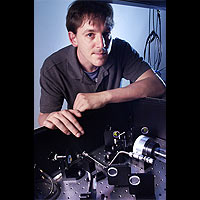 Using ultra-fast bursts of X-ray light, scientists at the Department of Energy's Stanford Linear Accelerator Center (SLAC) have observed the dizzyingly fast first steps of a solid melting into a liquid. They reported their results in the April 15 issue of the journal Science.

This experiment was one of the first two experiments ever to use femtosecond-fast X-rays generated from a linear accelerator (linac). The Sub-Picosecond Pulse Source (SPPS) facility makes the world's shortest bunches of electrons and turns them into very bright pulses of X-ray light one thousand times shorter than those made in synchrotron rings. Pulses of such short duration—lasting some 80 femtoseconds, or 80 quadrillionths of a second—shine a lightning-fast strobe light on the swift activities of atoms and molecules.

'Because of the amazing properties of the X-ray source, we were able to answer a long-standing problem in condensed matter physics, concerning how solids transform into liquids on ultra-fast time scales,' said Aaron Lindenberg, a staff scientist at the Stanford Synchrotron Radiation Laboratory (SSRL), which is part of SLAC.

Lindenberg was lead author on the Science paper, which included 50 scientists from 17 institutions around the world. Results from the other inaugural experiment appeared in the March 25 Physical Review Letters. Adrian Cavalieri from the University of Michigan and 50 colleagues from SLAC, SSRL and 15 other institutions developed and tested a new timing technique that will be essential for future experiments at SPPS and the Linac Coherent Light Source (LCLS), now under construction at SLAC. SPPS is laying the groundwork for LCLS, which will produce ultra-fast X-rays that are much brighter and move in phase with each other. The result will be 'molecular movies' that allow scientists to watch chemical reactions unfold.

In the first SPPS experiment, researchers shone laser light to melt a room-temperature crystal of semiconductor material and sent ultra-short X-ray pulses to probe the material. The scattered X-rays provided a glimpse of the first step in the transition from solid to liquid. Before the experiment starts, atoms randomly move small distances as they vibrate but are kept in position by chemical bonds to other atoms. The laser light instantaneously breaks the bonds, allowing atoms to continue moving in the random directions they were headed just before the bonds broke. In the first few hundred femtoseconds between solid and liquid, researchers saw that atoms, on average, retained the regular, repeated positions typical of solid crystals. Yet the atoms had moved far from their initial positions, exhibiting the disordered structure of a liquid. The result is a very unusual, intermediate state of matter.

'It's the first time we've been able to watch the pathways the atoms follow in the first femtoseconds as the material transitions from solid to liquid,' Lindenberg said.

Researchers learned the transition state is governed by inertial dynamics, simply stated by Newton's First Law—an object in motion continues in motion (in the same direction). Understanding the transition steps of ultra-fast melting may have technical applications, for example in micromachining and laser eye surgery.

In ultra-fast experiments, timing is everything. To put data in order chronologically—important for seeing chemical or other reactions over time—researchers need to time-stamp the arrival of the laser pulse that starts a reaction and the arrival of the X-ray pulse that observes the system.

To time-stamp such fleeting pulses, researchers place an electro-optic crystal next to the beam. The strong electric field generated by each electron bunch alters the properties of the crystal, but only at the instant the electrons pass by. The characteristics of the laser light exiting the crystal reveal the arrival time of each X-ray pulse.