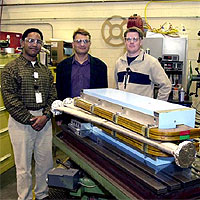 Corey Butler, mechanical designer; (left to right) Alex Bogacz, CASA staff scientist and experiment co-spokesman; and Robby Hicks, mechanical engineer, stand with one of the four BE magnets and a section of vacuum chamber built by the Machine Shop specifically for the Energy Recovery experiment. Image courtesy Jefferson Lab.

Newspaper, glass and aluminum recycling has become commonplace for most households and businesses. Jefferson Lab physicists will soon begin their own version of reuse — not with run-of-the-mill materials, but with radiofrequency energy and the high-energy electrons that they energize.

In an experiment slated to commence the third week of March, the Jefferson Lab accelerator, with slightly modified hardware, will go from "ordinary CEBAF accelerator" to "novel test bed" for recirculating linacs with energy recovery. Dave Douglas, an accelerator physicist with the Lab's Center for the Advanced Studies of Accelerators (CASA), and Andrew Hutton, the Accelerator Division's Director of Operations, first proposed this groundbreaking experiment, which was actively promoted and supported by the Accelerator Division and Lab management and was approved in July 2002 by the Program Advisory Committee. The experiment requires a new magnetic chicane but few other changes to the accelerator. The point of the experiment is to test a way to dramatically reduce RF (radiofrequency) energy usage, thus saving power or alternatively for the same power usage, producing brighter and higher intensity beams. Researchers believe that demonstration of this technology with multiple cavities at billion electron volt energies will provide valuable lessons for the future.

If the results are what scientists hope for, any advances could be applied to future energy-recovery linacs, or ERLs. Existing machines, like JLab's Free-Electron Laser, or FEL, could benefit, as well as planned next-generation devices at national laboratories and universities, such as ion colliders and advanced light sources.

"RF power is quite expensive and limited; one can only feed so much power through a klystron into radio-frequency [energy]. Energy recovery is the centerpiece of a new operation mode for recirculating linacs, where the high energy beam returns its energy for further acceleration of a 'fresh' batch of electrons," explains Alex Bogacz, a staff scientist with CASA and co-spokesman of the experiment. "The idea is not so new. Essentially we will be using the available RF power twice. Rather than throwing out a 'hot' beam of high-energy electrons, we will extract its energy for further usage, then safely dump it at a low energy. One can cut power consumption by a large factor."

There are two phases involved in the March experiment's 12-day run, involving proof-of-concept beam acceleration and deceleration at modest energies, in the range of several hundred million electron volts, or MeV (normally, the Lab's accelerator operates in the six billion electron volt, or 6 GeV range). A third phase has been planned but not yet scheduled. During this final phase — current doubling — the energy recovery scheme combined with simultaneous "coasting" beam (no acceleration), will result in the effective beam current being doubled — a very attractive proposition for next generation, high-brilliance light sources.

By March, the modest hardware changes to the accelerator will be made; technicians will have installed a chicane (series of four magnets) in the south linac (SL 22/23 region) designed to provide the slight phase delay as the beams circulate and recirculate, as well as the stands to accommodate them. A relatively small beam-extraction device, known as a "beam dump" is also being built, so that the electron beam can be "parked" and examined once each phase is complete. In addition, dedicated optics for beam transport, instrumentation and vacuum chambers (the pipe that carries the beam) are being readied.

None of the new components will impede or interfere with any previously installed equipment, and will remain in place once this energy-recycling study concludes.

During the experiment, JLab scientists will be making meticulous measurements of beam properties — among them, energy, current, emittance (beam size) and "halo" (stray particles traveling with the beam) — to insure their beam quality remains high. To that end, they will be monitoring the experiment's dedicated optics to determine what, if any, factors degrade performance.

"The big question is how this will affect the quality of the beam," Bogacz says. "In principle, beam quality should be preserved and there should be no emittance dilution. That's what we'll be hoping to find when we take measurements of the beam that we extract at the beam dump."

In any case, if the March study pans out, Bogacz believes energy-recovery techniques may lead to an entirely new class of accelerators. "This is the next evolutionary step," he contends. "We're trying to run smarter and use the accelerator's innate capabilities. We think if we're successful, this will be very useful for the next generation of light sources and precision colliders."

For more information regarding the Energy Recovery Experiment, visit the Center for Advanced Studies of Accelerators (CASA) website.