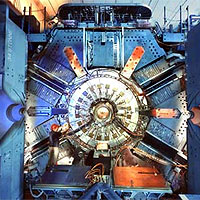 Physicist Antimo Palano representing the BABAR experiment presented the evidence for the identification of a new subatomic particle named Ds (2317) to a packed auditorium on Monday 28th April at the Department of Energy’s Stanford Linear Accelerator Center (SLAC). Initial studies indicate that the particle is an unusual configuration of a ‘charm’ quark and a ‘strange’ anti-quark. A scientific paper was sent for publication in Physical Review Letters on April 11th 2003.

"Congratulations to BaBar!" said SLAC Director, Jonathan Dorfan. "The discovery of this new particle underlines the vigor of our high energy physics research program, and is a concrete justification for the Department of Energy’s support of fundamental physics research. The existence of the particle is not a surprise, but its mass is lower than expected. This result will send theorists back to their drawing boards."

"The BaBar experiment continues to produce important new knowledge adding to our fundamental understanding of the structure of matter," said Dr. Raymond L. Orbach, Director of the Energy Department's Office of Science. "This impressive accomplishment reflects the success of a strong team of professionals at SLAC---accelerator physicists, computer specialists, engineers, administrators and many others---whose efforts were essential for the result. I would like to congratulate them all on their combined achievement."

Six types of quarks are present in nature. The up and down quarks are the lightest, and are found within the nuclei of atoms of ordinary matter. Heavier quarks were present in the early universe and are created today in particle accelerators and in collisions of cosmic rays with atoms in the earth's atmosphere. SLAC has a long tradition of discovery in the physics of charm quarks, beginning with the Nobel-prize-winning discovery of the first such particle, a charm-anticharm system, in 1974. The new particle called the Ds (2317), which combines a charm quark with another heavy quark - an anti strange, has unexpected properties that will provide insight into the force that binds the quarks together. This force, unlike most others in nature, becomes stronger as the distance between the two quarks increases.

Said Marcello Giorgi from INFN and the University of Pisa, who leads the collaboration, "This is an important achievement for BaBar. We have discovered a new charm particle in an experiment designed to probe the difference between matter and antimatter using bottom quarks. Sometimes the most exciting discoveries come from unexpected directions. There has been a buzz of excitement in the experiment in the past few weeks as we performed all possible checks to verify the reality of this new intriguing particle. By carefully studying the experimental data taken since 1999 we have been able to publish a precise measurement of its mass – 2317 Mega-electron Volts. SLAC’s accelerator people have done a fantastic job in providing us with all this data."

"The unexpected mass will make us look again at the forces between quarks and will stimulate new interest in charm-quark systems." said Bob Cahn, a BaBar collaborator from Lawrence Berkeley National Laboratory

More than 500 scientists and engineers from 75 institutions in Canada, China, France, Germany, Italy, the Netherlands, Norway, Russia, the United Kingdom, and the United States are working on BaBar.