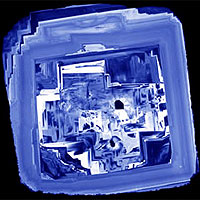 The image of the diamond was captured through a high-resolution imaging technique called cathodoluminescence. The sample was 2 mm across and called the 'Picasso' diamond because of its cubist appearance. The black spots are inclusions of coesite and other minerals. Image: D. Schulze, Courtesy University of Toronto

More than just symbols of wealth and beauty, diamonds are a testament to the history of the earth, says U of T professor Daniel Schulze.

Schulze, a professor in the Department of Geology at the University of Toronto at Mississauga, believes that the materials that form the gem diamonds mined in Guaniamo, Venezuela, originated on the ocean floor and has found hard evidence that supports this controversial theory. The study is published in the May 1 issue of Nature.

The diamond formation process begins, Schulze explains, when the mantle - the interior layer between the earth's core and its crust - forces lava up onto the ocean's floor. The lava then solidifies into a volcanic rock called basalt. When the basalt interacts with sea water, its oxygen composition changes. "The volcanic rocks are altered to form new minerals. It's like the steel in your bicycle changing to rust in the rain," he says.

Geological processes then thrust this altered basalt under the earth's continental plates where heat and pressure turn the basalt into eclogite - beautiful red and green rocks that may contain diamonds, if carbon is present. Over time, as the eclogite remains in the mantle, it eventually takes on the oxygen composition found in this environment. "This process can erase or modify past evidence of the ecolgite's oceanic origins," says Schulze. "But because diamonds [contained within the eclogite] are impermeable, they act as 'time capsules,' preserving inside themselves a record of conditions that existed during diamond formation."

In his study, Schulze and his team developed a new procedure using an ion microprobe to analyze tiny minerals, called coesite, in the diamonds. They compared these minerals to those in ocean-altered basalts and mantle eclogite, finding the coesite's oxygen composition a close match to that of the altered basalt, rather than the eclogite. "This proves these diamonds have an oceanic heritage," he says.

This analysis also explains why mantle eclogites have an unusual oxygen composition compared to the surrounding mantle. "Although, over time, the eclogite assumes most of the mantle's oxygen characteristics, it may not have completely lost the oxygen composition it inherited as ocean-altered basalt," says Schulze.

In addition, these particular diamonds, he says, seem to have "biogenic" carbon signatures, indicating that some of the carbon that formed the diamonds originally was living, such as ancient sea floor bacteria. "Attached to the altered basalts, this carbon would have, in essence, gone along for the ride as the rock was thrust under the continents." Heat and pressure would have turned the organic carbon into pure carbon in the form of graphite and, then finally, into diamond.

Studying diamonds is one of the only ways scientists can learn not only about what is found deep beneath the earth's crust but the history of the early earth and environmental conditions when the diamonds were formed. "These tiny time capsules have indeed provided the 'missing link' between the mantle and the crust."

Funding for this study was provided by the Natural Sciences and Engineering Research Council of Canada and the National Science Foundation.