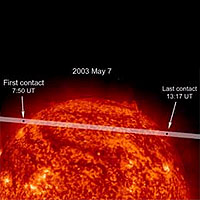 The planet Mercury will pass in front of the sun on Wednesday, May 7 in an unusual event called a transit. The Solar and Heliospheric Observatory (SOHO) spacecraft offers excellent, safe views of the rare occurrence to anyone with an Internet connection.

Mercury transits are rare, occurring only approximately a dozen times per century. Observers in Asia, Africa and Europe will have the best view of this transit, which will already be in progress as the sun rises over America (approximately 6 a.m. EDT).

The transit can't be seen with the unaided eye, since Mercury's apparent size is only about 1/160 of the sun's diameter. Direct telescope viewing is not recommended, since special precautions must be taken to avoid permanent eye damage.

Although the entire transit lasts over five hours, viewers in North America will only see the last 20 to 30 minutes of it. The event will be finished by the time the sun rises west of a line from the Great Lakes to the Carolinas, but the complete transit is safely viewable on the SOHO Web site at:

SOHO orbits a special point in space one million miles (about 1.6 million kilometers) from Earth, in line with the sun, to make continuous observations of solar activity. One of its instruments, the Large Angle and Spectrometric Coronagraph, will be able to see Mercury a few days before it transits the sun. Other instruments will track Mercury's progress across the solar disk during the transit. The pictures will be available almost immediately on the SOHO Web site. The SOHO mission is a project of international cooperation between NASA and the European Space Agency.

The planets Mercury and Venus are the only ones that appear to cross the face of the sun, as seen from Earth, since both are closer to the sun than Earth. Venus transits are also extremely rare, with just one pair eight years apart every 105 to 121 years.

"The last Venus transit was in 1882, so no one alive has seen one," said Espenak. "Happily, there will be a Venus transit June 8, 2004, so this year's Mercury transit can be taken as an appetizer for the main course."

The transits were important historically. "Venus transits were the Apollo project of the 18th and 19th centuries," said Espenak. "There were major international efforts, with scientific expeditions to remote corners of the world, in order to measure the apparent position of Venus on the solar disk. Using trigonometry and a careful analysis of observations, astronomers could determine the actual distances to Venus and the sun. Captain James Cook, the legendary British navigator and explorer, recorded the transit of Venus from Tahiti in 1769. The observation was a major motivation for his expedition to the South Pacific and the circumnavigation of the globe," Espenak explained.

For more information about transits of Mercury and Venus, including photographs, refer to:
http://sunearth.gsfc.nasa.gov/eclipse/transit/transit.html

For information on the Internet about Captain Cook's expedition, visit:
http://www.geocities.com/TheTropics/7557/cook.html