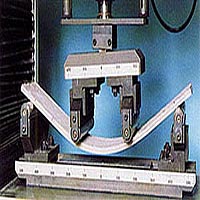 A new type of fiber-reinforced bendable concrete will be used for the first time in Michigan this summer—and University of Michigan scientists hope that their new material will find widespread use across the country.

The new concrete looks like regular concrete, but is 500 times more resistant to cracking and 40 percent lighter in weight. Tiny fibers that comprise about 2 percent of the mixture’s volume partly account for its performance. Also, the materials in the concrete itself are designed for maximum flexibility. Because of its long life, the Engineered Cement Composites (ECC) are expected to cost less in the long run, as well.

U-M’s ECC technology has been used already on projects in Japan, Korea, Switzerland and Australia, but has had relatively slow adoption in the United States, said engineering professor Victor Li, whose team is developing the engineered cement composites. That’s despite traditional concrete’s many problems: lack of durability and sustainability; failure under severe loading; and the resulting expenses of repair.

Li, who holds appointments in the departments of civil and environmental engineering and materials science and engineering, believes ECC addresses most of those problems. The ductile, or bendable, concrete is made mainly of the same ingredients in regular concrete minus the coarse aggregate, Li said. It looks exactly like regular concrete, but under excessive strain, the ECC concrete gives because the specially coated network of fibers veining the cement is allowed to slide within the cement, thus avoiding the inflexibility that causes brittleness and breakage, Li said.

Fiber-reinforced concrete is not new, but Li believes that U-M’s ECC—under development for the past 10 years—is vastly superior to other fiber-reinforced concretes in development today. The key is that ECC is engineered, Li said, which means that in addition to reinforcing the concrete with microscale fibers that act as ligaments to bond the concrete more tightly, scientists design the ingredients in the concrete itself to make it more flexible. The U-M holds four patents with three pending on ECC technologies, Li said.

’The broad field of micromechanics has tried to understand how composite materials behave,’ Li said. ’We went one step further and used the understanding as a material design approach in the development of ECC.’

This summer in Ypsilanti, Mich. the Michigan Department of Transportation will use the ECC to retrofit a section of the Grove Street bridge deck over I-94. An ECC slab will replace the expansion joint and link the adjacent concrete slabs to form a continuous deck. An expansion joint is a section with interlocking steel teeth that lets the concrete deck move as a result of temperature variations, but major problems occur when joints jam frequently, and scientists expect significant savings by using ECC. Li said state suppliers are being trained to make the ECC concrete now.

’The ECC material has promise for solving some of the deck durability issues we face, such as premature cracking,’ said Steve Kahl, supervisor, experimental studies group, with MDOT’s construction and technology division. ’We’re hoping the ECC will work well, and possibly lower the cost when experience is gained on large scale production.’

Long-term performance of ECC has been established by a patch repair placed on the Curtis Road bridge over M-14 in Ann Arbor in October 2002. The patch, which has experienced three winters of freezing and thawing cycles, has much better crack control than the normal concrete patch placed adjacent to the ECC one day earlier, Li said.

Madison, Wis.-based Arnold O’Sheridan is planning to design the Monona terrace section of the Lake Monona shoreline pedestrian and bike path with ECC, in collaboration with U-M. Li said scientists will implant the ECC path with sensors to monitor the performance of the material as it is exposed to environmental loads.

The newly constructed Mihara Bridge in Hokkaido, Japan, has a 5 cm ultra-thin deck of ECC which is expected to open to traffic in May. The bridge is 40 percent lighter than traditional concrete, and has an expected service life of 100 years, Li said.

While long-term studies are still needed, comparison studies by the School of Natural Resources and Environment’s Center for Sustainable Systems, in conjunction with Li’s group, show that over 60 years of service on a bridge deck, the ECC is 37 percent less expensive, consumes 40 percent less energy, and produces 39 percent less carbon dioxide (a major cause of global warming) than regular concrete. The study notes that the findings are based on the assumption that ECC lasts twice as long as regular concrete, a reasonable assumption given the known information, but it must be confirmed through further study.