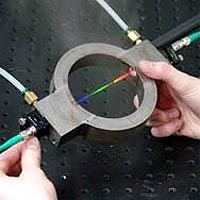 Scott Sanders, assistant professor of mechanical engineering, exploits the varying speed of light in his new laser system, which will enable UW-Madison engine researchers to gather more useful data about the gases they study. (Photo: courtesy College of Engineering)

In art, color is information. Just look at a painting by an artist such as Monet: Each uniquely hued brushstroke brings to life a new blade of grass, a leaf, a flower petal, a slice of sky-each a component of the complete picture.

Scientists, too, use color to paint clearer pictures of the things-everything from combustion gases to cancer cells-they study. And as a result of a new laser system that rapidly delivers a pulsed rainbow of colors, those pictures will contain more information than ever before. Mechanical Engineering Assistant Professor Scott Sanders developed the system, which is highlighted in the cover story of the May issue of Optics and Photonics News.

Laser light can indicate a research subject’s characteristics. ’We’d like to illuminate our subject with as many colors as possible, because we can get a lot of information about the subject by monitoring its color sensitivity,’ says Sanders, who is affiliated with the UW-Madison Engine Research Center (ERC).

At the ERC, combustion gases comprise one area of study. ’They absorb certain colors of light and not others,’ he says. ’And so if we put in one color, we might see some absorption or not, but if we put in a lot of colors, we can see all of the signatures of all of the gasses in the engine, because they all have some unique color dependence.’

Sanders’ laser builds on a phenomenon known as supercontinuum generation, in which researchers convert single-color lasers, such as a green or a red laser, into a multicolored beam using a special kind of optical fiber. Photonic crystal fibers enable them to generate this ’white’ laser beam, says Sanders.

While that method produces a range of laser colors-and thus, a large amount of information-the drawback is that the white laser delivers all of the colors simultaneously, says Sanders. Rather, researchers want to measure rapidly their subjects’ responses to individual colors.

So by directing the laser through an additional optical fiber about 20 kilometers long, Sanders created what he calls a ’color-dependent speed limit.’ Although all of colors leave the white laser at the same time, red travels through the fiber more quickly, while blue brings up the rear, and the rest of the colors fall somewhere in the middle. In photographs, they look like a continuous stream; in reality, each color exits the long fiber one after the other, like drops from a faucet. The entire laser scan occurs in a couple of millionths of a second.

For the engine researchers, who study gas properties such as temperature, constituents and pollutants, the scan through color occurs so quickly that the gas remains virtually unchanged. ’We’re putting in one color at a time, but we’re doing it so fast that the gas is basically frozen,’ says Sanders.

In this case, the researchers’ goal is to use the data to design engines that run cleaner and more efficiently. But, says Sanders, the laser system could be adapted to help detect cancerous cells, scan and evaluate multiple drug samples, or gauge objects’ distance from a certain point.

In addition, it could be useful for data-storage applications, particularly those that involve writing large amounts of information. ’Currently, we wait for the CD to move around past the laser, so we’re waiting for some mechanical motion,’ he explains. ’To get to a new spot on the CD, we have to wait for the CD to move. With our system, each color can be directed to a different direction, and the color can change much faster than anything mechanical. So now we can get to a new spot more quickly, so we could consider that we might be able to write data more quickly.’