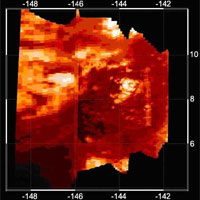 This high-resolution infrared image was taken during the Cassini spacecraft’s closest approach to Titan on Oct. 26, 2004. These images were obtained by Cassini’s visual and infrared mapping spectrometer instrument and show a bright, circular feature (8.5 degrees latitude, minus 143.5 degrees longitude) with two elongated wings extending westwards. Scientists think this feature might be a volcano.

The Cassini-Huygens mission is a cooperative project of NASA, the European Space Agency and the Italian Space Agency. The Jet Propulsion Laboratory, a division of the California Institute of Technology in Pasadena, manages the mission for NASA’s Science Mission Directorate, Washington, D.C. The Cassini orbiter and its two onboard cameras were designed, developed and assembled at JPL. The visual and infrared mapping spectrometer team is based at the University of Arizona.

A recent flyby of Saturn’s hazy moon Titan by the Cassini spacecraft has revealed evidence of a possible volcano, which could be a source of methane in Titan’s atmosphere.

Images taken in infrared light show a circular feature roughly 30 kilometers (19 miles) in diameter that does not resemble any features seen on Saturn’s other icy moons. Scientists interpret the feature as an ’ice volcano,’ a dome formed by upwelling icy plumes that release methane into Titan’s atmosphere. The findings appear in the June 9 issue of Nature.

’Before Cassini-Huygens, the most widely accepted explanation for the presence of methane in Titan’s atmosphere was the presence of a methane-rich hydrocarbon ocean,’ said Dr. Christophe Sotin, distinguished visiting scientist at NASA’s Jet Propulsion Laboratory, Pasadena, Calif.

’The suite of instruments onboard Cassini and the observations at the Huygens landing site reveal that a global ocean is not present,’ said Sotin, a team member of the Cassini visual and infrared mapping spectrometer instrument and professor at the Université de Nantes, France.

’Interpreting this feature as a cryovolcano provides an alternative explanation for the presence of methane in Titan’s atmosphere. Such an interpretation is supported by models of Titan’s evolution,’ Sotin said.

Titan, Saturn’s largest moon, is the only known moon to have a significant atmosphere, composed primarily of nitrogen, with 2 to 3 percent methane. One goal of the Cassini mission is to find an explanation for what is replenishing and maintaining this atmosphere. This dense atmosphere makes the surface very difficult to study with visible-light cameras, but infrared instruments like the visual and infrared mapping spectrometer can peer through the haze. Infrared images provide information about both the composition and the shape of the area studied.

The highest resolution image obtained by the visual and infrared mapping spectrometer instrument covers an area 150 kilometers square (90 miles) that includes a bright circular feature about 30 kilometers (19 miles) in diameter, with two elongated wings extending westward. This structure resembles volcanoes on Earth and Venus, with overlapping layers of material from a series of flows. ’We all thought volcanoes had to exist on Titan, and now we’ve found the most convincing evidence to date. This is exactly what we’ve been looking for,’ said Dr. Bonnie Buratti, team member of the Cassini visual and infrared mapping spectrometer at JPL.

In the center of the area, scientists clearly see a dark feature that resembles a caldera, a bowl-shaped structure formed above chambers of molten material. The material erupting from the volcano might be a methane-water ice mixture combined with other ices and hydrocarbons. Energy from an internal heat source may cause these materials to upwell and vaporize as they reach the surface. Future Titan flybys will help determine whether tidal forces can generate enough heat to drive the volcano, or whether some other energy source must be present. Black channels seen by the European Space Agency’s Huygens probe, which piggybacked on Cassini and landed on Titan’s surface in January 2005, could have been formed by erosion from liquid methane rains following the eruptions.

Scientists have considered other explanations. They say the feature cannot be a cloud because it does not appear to move and it is the wrong composition. Another alternative is that an accumulation of solid particles was transported by gas or liquid, similar to sand dunes on Earth. But the shape and wind patterns don’t match those normally seen in sand dunes.

The visual and infrared mapping spectrometer instrument can detect 352 wavelengths of light from 0.35 to 5.1 micrometers. It measures the intensities of individual wavelengths and uses the data to infer the composition and other properties of the object that emitted the light; each chemical has a unique spectral signature that can be identified.

Forty-five flybys of Titan are planned during Cassini’s four-year prime mission. The next one is Aug. 22, 2005. Radar data of the same sites observed by the visual and infrared mapping spectrometer may provide additional information.