How We'll Get Back to the Moon 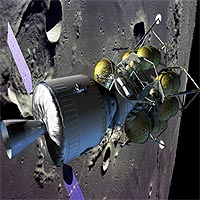 Before the end of the next decade, NASA astronauts will again explore the surface of the moon. And this time, we're going to stay, building outposts and paving the way for eventual journeys to Mars and beyond. There are echoes of the iconic images of the past, but it won't be your grandfather's moon shot.

This journey begins soon, with development of a new spaceship. Building on the best of Apollo and shuttle technology, NASA's creating a 21st century exploration system that will be affordable, reliable, versatile, and safe.

The centerpiece of this system is a new spacecraft designed to carry four astronauts to and from the moon, support up to six crewmembers on future missions to Mars, and deliver crew and supplies to the International Space Station.

The new crew vehicle will be shaped like an Apollo capsule, but it will be three times larger, allowing four astronauts to travel to the moon at a time.

The new spacecraft has solar panels to provide power, and both the capsule and the lunar lander use liquid methane in their engines. Why methane? NASA is thinking ahead, planning for a day when future astronauts can convert Martian atmospheric resources into methane fuel.

The new ship can be reused up to 10 times. After the craft parachutes to dry land (with a splashdown as a backup option), NASA can easily recover it, replace the heat shield and launch it again.

Coupled with the new lunar lander, the system sends twice as many astronauts to the surface as Apollo, and they can stay longer, with the initial missions lasting four to seven days. And while Apollo was limited to landings along the moon's equator, the new ship carries enough propellant to land anywhere on the moon's surface.

Once a lunar outpost is established, crews could remain on the lunar surface for up to six months. The spacecraft can also operate without a crew in lunar orbit, eliminating the need for one astronaut to stay behind while others explore the surface.

The launch system that will get the crew off the ground builds on powerful, reliable shuttle propulsion elements. Astronauts will launch on a rocket made up of a single shuttle solid rocket booster, with a second stage powered by a shuttle main engine.

A second, heavy-lift system uses a pair of longer solid rocket boosters and five shuttle main engines to put up to 125 metric tons in orbit -- about one and a half times the weight of a shuttle orbiter. This versatile system will be used to carry cargo and to put the components needed to go to the moon and Mars into orbit. The heavy-lift rocket can be modified to carry crew as well.

Best of all, these launch systems are 10 times safer than the shuttle because of an escape rocket on top of the capsule that can quickly blast the crew away if launch problems develop. There's also little chance of damage from launch vehicle debris, since the capsule sits on top of the rocket.

In just five years, the new ship will begin to ferry crew and supplies to the International Space Station. Plans call for as many as six trips to the outpost a year. In the meantime, robotic missions will lay the groundwork for lunar exploration. In 2018, humans will return to the moon. Here's how a mission would unfold:

A heavy-lift rocket blasts off, carrying a lunar lander and a 'departure stage' needed to leave Earth's orbit. The crew launches separately, then docks their capsule with the lander and departure stage and heads for the moon.

Three days later, the crew goes into lunar orbit. The four astronauts climb into the lander, leaving the capsule to wait for them in orbit. After landing and exploring the surface for seven days, the crew blasts off in a portion of the lander, docks with the capsule and travels back to Earth. After a de-orbit burn, the service module is jettisoned, exposing the heat shield for the first time in the mission. The parachutes deploy, the heat shield is dropped and the capsule sets down on dry land.

With a minimum of two lunar missions per year, momentum will build quickly toward a permanent outpost. Crews will stay longer and learn to exploit the moon's resources, while landers make one way trips to deliver cargo. Eventually, the new system could rotate crews to and from a lunar outpost every six months.

Planners are already looking at the lunar south pole as a candidate for an outpost because of concentrations of hydrogen thought to be in the form of water ice, and an abundance of sunlight to provide power.

These plans give NASA a huge head start in getting to Mars. We will already have the heavy-lift system needed to get there, as well as a versatile crew capsule and propulsion systems that can make use of Martian resources. A lunar outpost just three days away from Earth will give us needed practice of 'living off the land' away from our home planet, before making the longer trek to Mars.