Spin Structure of Protons and Neutrons 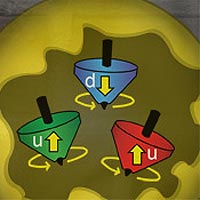 This artist's rendition shows quarks as spinning tops inside protons, with the protons embedded in a nucleus. A new theoretical calculation reveals that the spins of quarks may be modified by the environment of the protons and neutrons.

Normally, we think of building blocks as static objects. For instance, the brick and mortar used to build the local bank remain pretty much the same from the day it's built to the day it's torn down. But the building blocks of ordinary matter are different. These bricks are particles called quarks, and the mortar is made up of particles called gluons. Quarks and gluons are in constant motion, taking part in a complicated dance to build protons and neutrons (also called nucleons).

Ian Cloet, a theorist at Jefferson Lab and the Special Research Centre for the Subatomic Structure of Matter at the University of Adelaide, and his colleagues wondered how this quark-gluon dance was affected by the environment around the nucleons in which the quarks and gluons reside. In particular, they wanted to know how the spin of the quarks and gluons may be modified by the environment around the nucleons they're embedded in and how this modification may affect the spin of the nucleons themselves.

To find out, Cloet and his colleagues, Wolfgang Bentz at Tokai University in Japan and JLab's Tony Thomas, calculated the spin-dependent structure functions of nucleons. These probability distributions provide information on how the quark spins are organized inside the nucleon, and from these distributions, it is possible to determine what fraction of the nucleon spin comes from the quarks and what fraction comes from the gluons.

'So what this is telling us is that how the gluons' and quarks' spins add together to give spin one-half is different for a bound nucleon than it is for a free nucleon,' Cloet says. That means that while a nucleon's spin may remain constant, the proportion of that spin contributed by its constituents, the quarks and gluons, may change as the environment around nucleons change. 'The spin of the nucleon has to be spin one-half, but how you can get one-half can vary,' Cloet explains.

This result comes as something of a surprise. 'It was thought that the skin of the proton would expel this force from the other nucleons. It just really wouldn't get inside and affect the quarks. People expected the small-scale structures of the nucleon to remain mostly the same whether they're inside or outside the nucleus,' Cloet remarks.

'The idea is that this meson field generated by all the other nucleons is felt by the quarks inside the original proton. And this is changing their properties, and therefore changes these structure functions,' Cloet explains, 'Outside the nucleus, there are no mesons really interacting with these quarks.'

He says that while the new calculation shows a clear difference in how quarks and gluons contribute to a nucleon's spin, it doesn't reveal the exact makeup of these contributions. And the finding hasn't yet been backed up by experiment. But that could change. One of the goals of the 12 GeV Upgrade project at Jefferson Lab is to measure the origin of the basic properties of nucleons, including mass, size, electric field, magnetic field, and spin.

In the meantime, Cloet says this is the first calculation of the spin-dependent structure functions of nucleons inside the nucleus. He says this discovery is giving theorists new insight into Quantum Chromodynamics (QCD). QCD is a theory that describes the force, the strong force, that binds quarks into nucleons and nucleons into nuclei.

Cloet says this newest calculation demonstrates that the nucleus isn't a dull, well understood object: it still has many secrets, and investigating its properties is pushing the boundaries of physicists' understanding of QCD. It also indicates that the nucleus is far from a simple collection of protons and neutrons, but is truly a complex system of interacting quarks and gluons.