Hurricanes Are Getting Stronger, Study Says 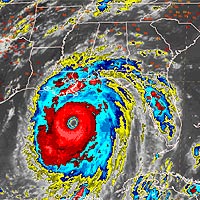 Eyeing Katrina
The peak winds of over 100 miles per hour that buffeted New Orleans during Hurricane Katrina could have been much worse had the storm made landfall at a different moment in the cycle of its eyewall. Long-lived, intense hurricanes often go through an eyewall replacement cycle that takes a day or so to complete. The result is collapse of the main eyewall and temporary weakening of the storm. Then an outer eyewall contracts and takes its place, allowing for restrengthening. Katrina appears to have been going through the weaker stage as it approached land. The two top images capture Katrina with an intact eyewall at 5:45 p.m. Eastern Daylight Time on Sunday, August 28, as it moved over warm water in the Gulf of Mexico. By 5:45 a.m. on Monday, the weakened eyewall is being further disrupted by interaction with the land surface.

The number of Category 4 and 5 hurricanes worldwide has nearly doubled over the past 35 years, even though the total number of hurricanes has dropped since the 1990s, according to a study by researchers at the Georgia Institute of Technology and the National Center for Atmospheric Research (NCAR). The shift occurred as global sea surface temperatures have increased over the same period. The research appears in the September 16 issue of Science.

Peter Webster, professor at Georgia Tech's School of Earth and Atmospheric Sciences, along with NCAR's Greg Holland and Georgia Tech's Judith Curry and Hai-Ru Chang, studied the number, duration, and intensity of hurricanes (also known as typhoons or tropical cyclones) that have occurred worldwide from 1970 to 2004. The study was supported by the National Science Foundation (NSF), NCAR's primary sponsor.

Category 4 hurricanes have sustained winds from 131 to 155 miles per hour; Category 5 systems, such as Hurricane Katrina at its peak over the Gulf of Mexico, feature winds of 156 mph or more.
Katrina damage.

'Category 4 and 5 storms are also making up a larger share of the total number of hurricanes,' said Curry, chair of the School of Earth and Atmospheric Sciences at Georgia Tech and coauthor of the study. 'Category 4 and 5 hurricanes made up about 20% of all hurricanes in the 1970s, but over the last decade they accounted for about 35% of these storms.'

All this is happening as sea surface temperatures have risen across the globe between one-half and one degree Fahrenheit, depending on the region, for hurricane seasons since the 1970s.

'Our work is consistent with the concept that there is a relationship between increasing sea surface temperature and hurricane intensity,' said Webster. 'However, it's not a simple relationship. In fact, it's difficult to explain why the total number of hurricanes and their longevity has decreased during the last decade, when sea surface temperatures have risen the most.'

A study published in July in the journal Nature came to a similar conclusion. Focusing on North Atlantic and North Pacific hurricanes, Kerry Emanuel (Massachusetts Institute of Technology) found an increase in their duration and power, although his study used a different measurement to determine a storm's power.

But whether all of this is due to human-induced global warming is still uncertain, said Webster. 'We need a longer data record of hurricane statistics, and we need to understand more about the role hurricanes play in regulating the heat balance and circulation in the atmosphere and oceans.'

Webster is currently attempting to determine the basic role of hurricanes in the climate of the planet. 'The thing they do more than anything is cool the oceans by evaporating the water and then redistributing the oceans' tropical heat to higher latitudes,' he said.

'But we don't know a lot about how evaporation from the ocean surface works when the winds get up to around 100 miles per hour, as they do in hurricanes,' said Webster, who adds that this physical understanding will be crucial to connecting trends in hurricane intensity to overall climate change.

'If we can understand why the world sees about 85 named storms a year and not, for example, 200 or 25, then we might be able to say that what we're seeing is consistent with what we'd expect in a global warming scenario. Without this understanding, a forecast of the number and intensity of tropical storms in a future warmer world would be merely statistical extrapolation."