Prelude to an Earthquake? 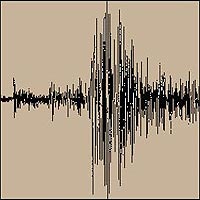 A geophysicist from the U.S. Department of Energy’s Lawrence Berkeley National Laboratory (Berkeley Lab) has identified possible seismic precursors to two recent California earthquakes, including the 1989 Loma Prieta earthquake that wreaked havoc throughout the Bay Area.

After sifting through seismic data from the two quakes, Valeri Korneev found a spike in the number of micro-earthquakes followed by a period of relative calm in the crust surrounding the quakes’ epicenters — months before the quakes occurred. Although more work needs to be conducted to determine whether other large quakes are foreshadowed by a similar rise and subsequent decline in small-magnitude tremors, Korneev’s analysis suggests that these peaks may be indicative of the total set of geological stresses that affect the timing and location of large earthquakes. Understanding this total stress picture may eventually make it be possible to predict destructive earthquakes within a much shorter time frame than currently possible.

“Peaks in seismic activity in the crust surrounding a fault could help signal the arrival of large earthquakes,” says Korneev of Berkeley Lab’s Earth Sciences Division. “These peaks may be a good mid-term precursor and allow authorities to declare alerts several months before earthquakes.”

He will present his research Dec. 9 at the American Geophysical Union’s Fall meeting in San Francisco.

Predicting the location and date of impending earthquakes has so far remained elusive. Instead, scientists rely on earthquake forecasts, which are statistical tools that offer the probability of a quake occurring within a certain time frame. These forecasts are largely based on the seismic history of known fault lines. For example, the U.S. Geological Survey’s official seismic risk assessment gives a 27 percent chance that a magnitude 7.0 earthquake will occur on the Bay Area’s Hayward Fault sometime in the next 30 years.

“Such long-term statistical forecasts, though useful to government planners, are not effective for taking near-term, damage-minimizing action,” says Korneev. “We are not able to stay alert every day.”

But the prospect of more precise predictions has been hindered by a lack of detectable changes in a fault’s behavior prior to a quake. It’s as if some destructive earthquakes occur out of the blue, completely unannounced.

Then, in 2004, a magnitude 6.0 quake rattled the town of Parkfield, California, also known as the seismology capital of the world. Here, where the San Andreas Fault cuts through central California, a magnitude 6.0 quake has occurred roughly every 22 years for about the last 100 years. The 2004 quake happened after a 38-year lull, and geologists were ready with an extensive network of instruments and boreholes that record every seismic hiccup in the area.

Soon after the quake, scientists pored over the network’s data to determine if the San Andreas Fault had dropped any clues that a quake was imminent. The first reports failed to find anything unusual. The few years preceding the quake were marked by the San Andreas Fault’s typical restlessness. There was no ominous build-up or calm before the storm, just a steady stream of normal data.

Korneev, however, decided to exclude from his analysis those tremors that occurred directly along the narrow portion of the San Andreas Fault that ruptured during the quake. Instead, he only included seismic activity that occurred along the fault’s flanks. According to Korneev, earthquakes directly within the creeping or moving portion of the fault zone were excluded because they manifest stress-release processes rather than stress accumulation.

Minus the data from the fault-zone quakes, his new analysis revealed a possible harbinger. He found a sharp increase in seismic activity that started one year before the 2004 quake and peaked four to six months before the quake. This spike was followed by a steady decrease in activity during the last few months leading up to the quake.

Inspired by this discovery, Korneev conducted a similar analysis of the seismic activity that preceded the 1989 magnitude 7.0 Loma Prieta earthquake, which was also sparked when a portion of the San Andreas Fault shifted. He focused his attention on the area to the west of Hayward Fault zone and the other seismically active areas adjacent to the epicenter. In the two months prior to the Oct. 17 quake, seismic activity increased to about eight times above normal levels. This peak was followed by a decrease in activity leading up to the powerful earthquake.

Korneev interprets the observed increase in seismic activity prior to the large quakes as a signature of the escalating stress level in the surrounding crust. He attributes the peak and subsequent reduction in seismic activity to damage-induced rock softening processes.

“Peaks in seismicity occurring several months before two recent large San Andreas Fault quakes indicate that they are good candidates for earthquake prediction studies,” says Korneev. “The precursor is an increase in small magnitude earthquakes in the crust surrounding the impending quake’s epicenter. This could give seismologists a clue as to what to look for when monitoring fault zones.”

In the future, Korneev would like to determine whether other well-studied large earthquakes in California were also prefaced by this phenomenon, which he calls microseismic emission precursors. He would also like to begin monitoring the seismic activity surrounding the Hayward Fault in California, which is due for a major earthquake.

Data processing for this research was conducted at Berkeley Lab’s Center for Computational Seismology.