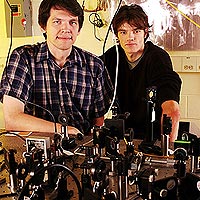 A series of publications in the journal Nature highlights the race among competing research groups toward the long-anticipated goal of quantum networking.

In one of three papers published the journal’s December 8 issue, a group of physicists from the Georgia Institute of Technology led by Professors Alex Kuzmich and Brian Kennedy describe the storage and retrieval of single photons transmitted between remote quantum memories composed of rubidium atoms. The work represents a significant step toward quantum communication and computation networks that would store and process information using both photons and atoms.

But the researchers caution that even with their rudimentary network operation, practical applications for quantum networking remain a long way off.

“The controlled transfer of single quanta between remote quantum memories is an important step toward distributed quantum networks,” said Alex Kuzmich, the Cullen-Peck Assistant Professor in Georgia Tech’s School of Physics. “But this is still a building block. It will take a lot of steps and several more years for this to happen in a practical way.”

Slightly more than a year ago in a paper published in the journal Science, Kuzmich and collaborator Dzmitry Matsukevich described transferring atomic state information from two different clouds of rubidium atoms onto a single photon. That work was the first time that quantum information had been transferred from matter to light.

From an applications perspective, the storage and retrieval of a qubit state in an atomic quantum memory node is an important step towards a “quantum repeater.” Such a device would be necessary for transmitting quantum information long distances through optical fibers.

Existing telecommunications networks use classical light to transmit information through optical fibers. To carry information long distances, such signals must be periodically boosted by repeater stations that cannot be used for quantum networking.

The Georgia Tech researchers began their experiment by exciting a cloud of rubidium atoms stored in a magneto-optical trap at temperatures approaching absolute zero. The excitation can generate a photon – but only infrequently, perhaps once every five seconds. Because it is in resonance with the atoms from which it was created, the photon carries specific quantum information about the excitation state of the atoms.

The photon was sent down approximately 100 meters of optical fiber to a second very cold cloud of trapped rubidium atoms. The researchers controlled the velocity of the photon in the second cloud by an intense control laser beam. Once the photon was inside the cloud, the control beam was switched off, allowing the photon to come to a halt inside the dense ensemble of atoms.

“The information from the photon is stored in the state of excitation of many atoms of the second ensemble,” explained Jenkins, a graduate student who specializes in quantum optics theory. “Each atom in the ensemble is slightly flipped, so the atomic ensemble is sharing this information – which is really information about spin.”

“When the single photon is generated, the first atomic ensemble is in an excited state,” explained Chaneliere, a postdoctoral fellow in the Kuzmich lab. “When we read the information from the second ensemble and find a coincidence between its excitation and the excitation of the first ensemble, we have demonstrated storage of the photon.”

Storage of the photon for even a brief period of time within the atomic ensemble depends on careful control of potentially-interfering magnetic fields. And it works only because the rubidium atoms are so cold that their motion is limited.

“Quantum information is very fragile,” said Chaneliere. “If you have a magnetic field, the atoms spin out of phase, and you can lose the information. For the moment, that is certainly a limitation on the use of this for quantum networking.”

For the future, the team hopes to add additional nodes to their rudimentary quantum network and encode useful information onto their photons.

They must also increase the probability of creating single photons from the first atomic cloud. While gathering data, the researchers excited the first cloud of atoms approximately 200 times a second. A single photon was created about once every five seconds, reported Matsukevich, a graduate student in the Kuzmich lab.

Highlighting the speed at which progress is being made toward quantum networking, Kuzmich, Kennedy and their team have more recently demonstrated entanglement between two atomic qubits separated by a distance of 5.5 meters. The work is described in a paper submitted to the journal Physical Review Letters.

“This entanglement would be important to a number of applications, including quantum cryptography,” said Kuzmich. “We have generated entanglement of atomic qubits. We also showed that we can take this entanglement and map it from atoms to photons.”