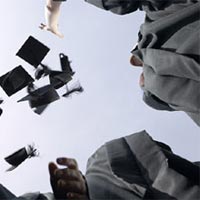 According to new survey results, the number of Ph.D. degrees granted in science and engineering (S&E) fields has increased for the second year in a row. Despite the gains, the 26,275 Ph.D. degrees earned in the 2004 academic year--the period the survey covers--are still shy of the 1998 peak of 27,278.

'Although there was an increase for two successive academic years, there is not yet sufficient evidence for determining if there is a new trend,' says the report, which was issued in Nov. by the National Science Foundation.

Approximately 62 percent of the total Ph.D.s earned in 2004 were in S&E fields. Of the remainder, roughly 16 percent were earned in education, 12 percent in the humanities, 6 percent in professional or other fields, and 4 percent in health fields.

Biological sciences was the only S&E field to issue more doctorates than ever before. Physical sciences, psychology and engineering in 2004 were still well below their past peaks. Doctorates in physics alone have declined nearly 20 percent in the past 10 years. The number of graduate students enrolling in physics, however, has been increasing since 2000, so that trend may reverse in future years.

According to the survey, over 50 percent of earned doctorates in several S&E fields went to non-U.S. citizens in 2004. The fields with the highest percent of non-U.S. recipients were--in order--engineering, computer science, mathematics, and physics.