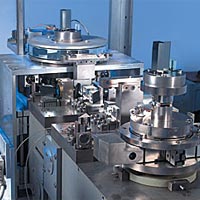 An instrument called GAMS4, originally designed and built at NIST and now located at Institut Laue Langevin in France, was used in experiments that helped to confirm Einstein’s famous equation E=mc². GAMS4 measured the angle at which gamma rays are diffracted by two identical crystals made of atoms separated by a known distance. The two crystals are the dark gray rectangles on circular platforms in the foreground and background of the photo.

Photo by Artechnique, Courtesy of ILL

Albert Einstein was correct in his prediction that E=mc2, according to scientists at the Commerce Department’s National Institute of Standards and Technology (NIST) and the Massachusetts Institute of Technology (MIT) who conducted the most precise direct test ever of what is perhaps the most famous formula in science.

In experiments described in the Dec. 22, 2005, issue of Nature,* the researchers added to a catalog of confirmations that matter and energy are related in a precise way. Specifically, energy (E) equals mass (m) times the square of the speed of light (c2), a prediction of Einstein’s theory of special relativity. By comparing NIST measurements of energy emitted by silicon and sulfur atoms and MIT measurements of the mass of the same atoms, the scientists found that E differs from mc2 by at most 0.0000004, or four-tenths of 1 part in 1 million. This result is “consistent with equality” and is 55 times more accurate than the previous best direct test of Einstein’s formula, according to the paper.

Such tests are important because special relativity is a central principle of modern physics and the basis for many scientific experiments as well as common instruments like the global positioning system. Other researchers have performed more complicated tests of special relativity that imply closer agreement between E and mc2 than the NIST/MIT work, but additional assumptions are required to interpret their results, making these previous tests arguably less direct.

The Nature paper describes two very different precision measurements, one done at NIST by a group led by the late physicist Richard Deslattes, and another done at MIT by a group led by David Pritchard. Deslattes developed methods for using optical and X-ray interferometry—the study of interference patterns created by electromagnetic waves—to precisely determine the spacing of atoms in a silicon crystal, and for using such calibrated crystals to measure and establish more accurate standards for the very short wavelengths characteristic of highly energetic X-ray and gamma ray radiation.

According to the basic laws of physics, every wavelength of electromagnetic radiation corresponds to a specific amount of energy. The NIST team determined the value for energy in the Einstein equation, E = mc2, by carefully measuring the wavelength of gamma rays emitted by silicon and sulfur atoms.

“This was Dick’s original vision, that a comparison like this would someday be made,” said Scott Dewey, a NIST physicist who is a co-author of the Nature paper. “The idea when he started working on silicon was to use it as a yardstick to measure the wavelengths of gamma rays, and use this in a test of special relativity. It took 30 years to realize his idea.”

The NIST/MIT tests focused on a well-known process: When the nucleus of an atom captures a neutron, energy is released as gamma ray radiation. The mass of the atom, which now has one extra neutron, is predicted to equal the mass of the original atom, plus the mass of a solitary neutron, minus a value called the neutron binding energy. The neutron binding energy is equal to the energy given off as gamma ray radiation, plus a small amount of energy released in the recoil motion of the nucleus.

The gamma rays in this process have wavelengths of less than a picometer, a million times smaller than visible light, and are diffracted or bent by the atoms in the calibrated crystals at a particular energy-dependent angle. Using a well-known mathematical formula, scientists can combine these angles with values for the crystal lattice spacing to determine the energy contained in individual gamma ray particles.

In the experiments described in Nature, NIST scientists measured the angle at which gamma rays are diffracted by crystals with known lattice spacings at the Institut Laue Langevin (ILL) in Grenoble, France. The ILL has the world’s premier facility for colliding nuclei and neutrons and capturing the resulting gamma rays at the same instant. Accurate gamma-ray measurements are particularly challenging because the diffraction angles are less than 0.1 degree. The measurements were done using an instrument that was originally designed and built at NIST.

The MIT team measured the mass numbers used in the tests of Einstein’s formula by placing two ions (electrically charged atoms) of the same element, one with an extra neutron, in a small electromagnetic trap. Scientists counted the revolutions per second made by each ion around the magnetic field lines within the trap. The difference between these frequencies can be used to determine the masses of the ions. The experiment was performed with both silicon and sulfur ions. The novel two-ion technique virtually eliminates the effect of many sources of “noise,” such as magnetic field fluctuations, that reduce measurement accuracy. This work led to greatly improved values for the atomic masses of silicon and sulfur.

The work was supported by NIST and the National Science Foundation.

As a non-regulatory agency of the Commerce Department’s Technology Administration, NIST promotes U.S. innovation and industrial competitiveness by advancing measurement science, standards and technology in ways that enhance economic security and improve our quality of life.