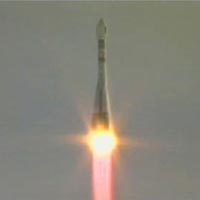 ESA PR 61-2005. The first Galileo demonstrator is in orbit, marking the very first step to full operability of Europe’s new global navigation satellite system, under a partnership between ESA and the European Commission (EC).

Giove A, the first Galileo in-orbit validation element, was launched today from Baikonur, Kazakhstan, atop a Soyuz-Fregat vehicle operated by Starsem. Following a textbook lift-off at 05:19 UTC (06:19 CET), the Fregat upper stage performed a series of manoeuvres to reach a circular orbit at an altitude of 23 258 km, inclined at 56 degrees to the Equator, before safely deploying the satellite at 09:01:39 UTC (10:01:39 CET).

“Years of fruitful cooperation between ESA and the EC have now provided a new facility in space for improving the life of European citizens on Earth” said ESA Director General Jean Jacques Dordain congratulating ESA and industrial teams on the successful launch.

This 600 kg satellite, built by Surrey Satellite Technology Ltd (SSTL) of Guildford, in the UK, has a threefold mission. First, it will secure use of the frequencies allocated by the International Telecommunications Union (ITU) for the Galileo system. Second, it will demonstrate critical technologies for the navigation payload of future operational Galileo satellites. Third, it will characterise the radiation environment of the orbits planned for the Galileo constellation.

Formerly known as GSTB-V2/A (Galileo System Test Bed Version 2), Giove A carries two redundant, small-size rubidium atomic clocks, each with a stability of 10 nanoseconds per day, and two signal generation units, one able to generate a simple Galileo signal and the other, more representative Galileo signals. These two signals will be broadcast through an L-band phased-array antenna designed to cover all of the visible Earth under the satellite. Two instruments will monitor the types of radiation to which the satellite is exposed during its two year mission.

The satellite is under the control of SSTL’s own ground station. All systems are performing well, the solar arrays are deployed and in-orbit checkout of the satellite has begun. Once the payload is activated, the Galileo signals broadcast by Giove A will be carefully analysed by ground stations to make sure they satisfy the criteria of the ITU filings.

A second demonstrator satellite, Giove B, built by the European consortium Galileo Industries, is currently being tested and will be launched later. It is due to demonstrate the Passive Hydrogen Maser (PHM), which, with a stability better than 1 nanosecond per day, will be the most accurate atomic clock ever launched into orbit. Two PHMs will be used as primary clocks onboard the operational Galileo satellites, with two rubidium clocks serving as backups.

Galileo will be Europe’s own global navigation satellite system, providing a highly accurate, guaranteed global positioning service under civilian control. It will be inter-operable with the US Global Positioning System (GPS) and Russia’s Global Navigation Satellite System (Glonass), the two other global satellite navigation systems. Galileo will deliver real-time positioning accuracy down to the metric range with unrivaled integrity.