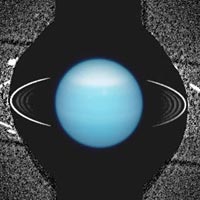 The above image is a color composite made from short exposures, showing the disk of Uranus with some cloud features. Just to the left and right of the color image of the disk are a combination of deeper, panchromatic images showing Uranus's inner rings; the brightest is the Epsilon Ring. The satellite Mab is visible as eight dots adjacent to the outer ring on the right side.

The Hubble Space Telescope photographed a new pair of rings around Uranus and two new, small moons orbiting the planet. The largest ring is twice the diameter of the planet's previously known rings; the rings are so far from the planet that they are being called Uranus' 'second ring system.' One of the new moons shares its orbit with one of the rings. Analysis of the Hubble data also reveals the orbits of Uranus' family of inner moons have changed significantly over the past decade.

Since dust orbiting Uranus is expected to be depleted by spiraling away, the planet's rings must be continually replenished with fresh material. 'The new discoveries demonstrate that Uranus has a youthful and dynamic system of rings and moons,' said Mark Showalter of the SETI Institute, Mountainview, Calif.

Showalter and Jack Lissauer of NASA's Ames Research Center propose that the outermost ring is replenished by a 12-mile-wide newly discovered moon, named Mab, which they first observed in 2003.

Meteoroid impacts continually blast dust off the surface of Mab. The dust then spreads out into a ring around Uranus. Mab's ring receives a fresh infusion of dust from each impact. Nature keeps the ring supplied with new dust while older dust spirals away or bangs back into the moon.