Your Name Could Make a 'Deep Impact' on a Comet 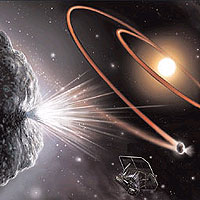 This poster is an educational product designed to provide an artistic as well as factual description of the Deep Impact mission for use in schools. The back of the poster contains material about comets and the mission. The front of the poster is an artistic rendering of the July 2005 encounter. The painting of the comet was created by Dale Rutter of the Seattle Art Institute. In the background is a view of the path of the spacecraft as it traveled around the sun and then crossed paths with the comet. In the foreground is a close-up view of the crater forming after impact, with the flyby spacecraft (slightly below center) and the Earth (far right) watching the momentous event. This artist's rendition is not to scale or necessarily what we will see after impact. To download this poster: click here.

People worldwide may celebrate July 4, 2005, as the day their names reach a comet. NASA is launching a campaign to send hundreds of thousands of names to comet Tempel 1.

The names will be carried on board NASA's Deep Impact spacecraft, the first deep-space mission designed to really reach out and touch a comet. Mission scientists are confident an impact on a comet's nucleus will answer basic questions about the nature and composition of these celestial wanderers.

'This is an opportunity to become part of an extraordinary space mission,' said Dr. Don Yeomans, an astronomer at JPL and a member of Deep Impact's science team. 'When the craft is launched in December 2004, yours and the names of your loved-ones can hitch along for the ride and be part of what may be the best space fireworks show in history.'

Deep Impact's larger flyby spacecraft will carry a smaller impactor spacecraft to Tempel 1 for release into the comet's path for a planned collision. The flyby spacecraft will take pictures as the 370-kilogram (816 pound) copper-tipped impactor plunges into Tempel 1 at about 37,000 kilometers (22,990 miles) per hour. The impactor is expected to make a spectacular, football field-sized crater, seven to 15 stories deep, in the speeding comet. Carried aboard the impactor will be a standard mini-CD containing the names of comet, space and other enthusiasts from around the world.

'This campaign will allow people from around the world to become directly involved with Deep Impact and through that get them thinking about the scientific reasons for the mission,' said University of Maryland astronomy professor Dr. Michael A'Hearn, Deep Impact's principal investigator. 'We particularly hope to capture the interest of young students, as they will become the explorers of the next generation.'

People may submit their names for this historic one-way mission by visiting NASA's Deep Impact Web site, now through February 2004, at http://deepimpact.jpl.nasa.gov/ .

The collision between the impactor and Tempel 1 is not forceful enough to make an appreciable change in the comet's orbital path around the Sun. The comet poses no threat to Earth.

Deep Impact was selected in 1999 as a NASA Discovery mission. The goal of the Discovery Program is to launch many smaller missions with fast development times, each for a fraction of the cost of NASA's larger missions. The main objective is to enhance our understanding of the solar system by exploring the planets, their moons, and small bodies, such as comets and asteroids.

For information about NASA and other space flight missions on the Internet, visit http://www.nasa.gov.