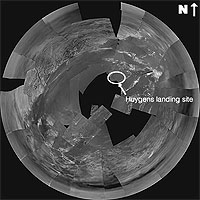 As the large amount of data collected by the ESA Huygens probe during its descent onto Titan is being processed, new views of this fascinating world become available.

The Descent Imager Spectral Radiometer (DISR) team have now produced the first complete ‘stereographic’ and ‘gnomonic’ mosaic images. Using special image projection techniques, the team combined a series of images captured by Huygens while rotating on its axis at an altitude of about 20 kilometres.

The DISR on board Huygens took its series of photographs of the ever-approaching surface in sets of three, or ‘triplets’, as it dropped through Titan’s atmosphere on 14 January this year. The images sent back to Earth partially overlap, due to the probe’s rotation during the descent and due to the overlap between the fields of view of the different cameras.

DISR scientists are studying these images for similarities, such as physical features common to more than one image, and are constructing ‘mosaics’, like jigsaw puzzles.

There are many different ways of rendering three-dimensional objects into two dimensions. Different kinds of projections for maps or photographs are able to represent realistically things like size, areas, distances and perspective. One particular kind of projection used for spheres in two dimensions (for example on some maps of Earth or the celestial sphere) is ‘stereographic’ projection.

A ‘gnomonic’ projection has also been produced, and this tends to make the surface appear as if it was flat. This type of projection is often found on maps used by navigators and aviators in determining the shortest distance between two points. However there is a lot of distortion of scale at the outer edges of gnomonic projections.

On the stereographic view, like that through a ‘fish-eye’ lens, the bright area to the north (top of the image) and west is higher than the rest of the terrain, and covered in dark lines that appear to be drainage channels. These lead down to what appears to be a shoreline with river deltas and sand bars.

The current interpretation of these lines is that they are cut by flowing liquid methane. Some of them may have been produced by precipitation run-off, producing a dense network of narrow channels and features with sharp branching angles. Some others may have been produced by sapping or sub-surface flows, giving shape to short stubby channels that join at 90 degree angles.

The largest run off channel starts at about the 12 o’clock position from an inlet on the shoreline and stretches to the left. The largest sapping channel starts at the 9 o’ clock position and goes in a straight line up and left. The dark wide corridor to the west just below the sapping channel appears to be a major flow channel that empties into the mud flats of the lakebed.

The bright shapes to the north-east and east look to be ridges of ice gravel that are slightly higher than the flats around them, and the probe landing is believed to be just south-west of the semi-circular shape. The light and dark areas to the south are still of unknown nature.


On the gnomonic projection, the landing site is approaching and the surface features become sharper. North is at the top of the image. From lower left to upper right appears to be a ridge of ice boulders projecting through the darker lakebed material.

They are thought to slow the major flow from the west and cause the fluid to pond on the north-west side of the image, causing sedimentation of the dark material. Seepage between the boulders cuts the sediment into channels as the fluid continues to the south-east.

The members of the Huygens DISR instrument team are based throughout the USA and Europe, with the largest contributing groups from the University of Arizona, USA, the Max Planck Institute, Germany, and the Paris Observatory, Meudon, France.