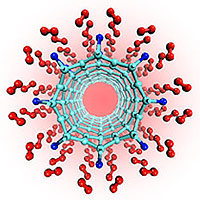 This computer model shows how titanium atoms (dark blue) can attach above the centers of single-walled carbon nanotubes (light blue). Quantum calculations and modeling by a NIST researcher and his colleague reveal that each titanium atom can bond with four hydrogen molecules (red), a finding that could lead to efficient fuel cells for future automobiles.

New quantum calculations and computer models show that carbon nanotubes ’decorated’ with titanium or other transition metals can latch on to hydrogen molecules in numbers more than adequate for efficient hydrogen storage, a capability key to long-term efforts to develop fuel cells, an affordable non-polluting alternative to gasoline.

Using established quantum physics theory, they predict that hydrogen can amass in amounts equivalent to 8 percent of the weight of ’titanium-decorated’ singled walled carbon nanotubes. That’s one-third better than the 6 percent minimum storage-capacity requirement set by the FreedomCar Research Partnership involving the Department of Energy and the nation’s ’Big 3’ automakers.

As important, the four hydrogen molecules (two atoms each) that link to a titanium atom are relinquished readily when heated. Such reversible desorption is another requirement for practical hydrogen storage.

Resembling exceedingly small cylinders of chicken wire, so-called single-walled carbon nanotubes are among several candidate materials eyed for hydrogen storage. Reaching the 6 percent target, however, has proved difficult—a potential ’showstopper,’ according to many in the field. Positioning a titanium atom above the center of hexagonally arranged carbon atoms (the repeating geometric pattern characteristic of carbon nanotubes) appears to resolve the impasse according to this new study.

The new results, obtained with a method for calculating the electronic structure of materials, surprised the researchers. Interactions among carbon, titanium and hydrogen seem to give rise to unusual attractive forces. The upshot is that four hydrogen molecules can dock on a titanium atom, apparently by means of a unique chemical bond of modest strength. Several forces at work within the geometric arrangement appear to play a role in the reversible tethering of hydrogen, Yildirim says.

Yildirim and Ciraci report that their findings ’suggest a possible method of engineering new nanostructures for high-capacity storage and catalyst materials.’ The work was funded, in part, by the Department of Energy and National Science Foundation.