No one alive has seen this, but you can 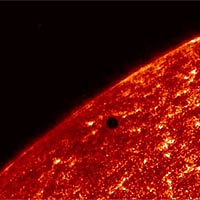 TRACE scientists got a preview with the Mercury Transit last May. Venus will also be imaged by TRACE, but it's 30 times larger than Mercury. Credit: NASA / LMSAL

"There will be no other till the twenty-first century of our era has dawned upon the Earth and the June flowers are blooming in 2004. What will be the state of science - God only knows."

NASA invites you to view a rare celestial event, one not seen by any person now alive. On June 8, the planet Venus will appear to cross in front of the Sun as seen from Earth. The last 'Venus transit' occurred more than a century ago, in 1882, and was used to compute the distance from the Earth to the Sun. Scientists with NASA's Kepler mission hope to discover Earth-like planets outside our solar system by searching for transits of other stars by planets that might be orbiting them.

NASA has a partnership with observatories and museums to help people observe the event safely. People must take special precautions to safely observe the Sun directly.

Alternatively, people can safely observe the event by viewing it indirectly over the internet, with images from solar observatories and satellites. For internet viewing options, including a live webcast from Athens, Greece, made in partnership with the Exploratorium in San Francisco, Calif.

The Venus transit will be visible over about 75 percent of the Earth, and will be nearing its end at sunrise over central and eastern North America. The event will be finished by the time the Sun rises over the West Coast of North America (but viewers in Alaska can see the beginning of the transit and, for Northern Alaskans, the entire transit, because the Sun does not go below the horizon). A map of the transit visibility is available here. Transit times for cities worldwide are available here.

'People using a filter approved for safe solar viewing can expect to see a small black dot, about 1/30 the size of the solar disk, very slowly moving across the Sun,' said Fred Espenak, an eclipse expert at NASA's Goddard Space Flight Center, Greenbelt, Md. Espenak will travel to Greece to observe the entire transit.

If people miss the June 8 Venus transit, they will have another chance in 2012 (June 6). After that, there will not be another Venus transit until 2117 (December 11).

During the 19th century, Venus transits were essential for astronomers to fathom the scale of the heavens, because they were used to give a relatively accurate distance from the Earth to the Sun. Once that distance was known accurately, astronomers could determine the size of our solar system, and calculate the distances to nearby stars by measuring how much they appeared to shift against remote background stars as the Earth progressed in its orbit around the Sun.

So critical was this measurement that, beginning in 1761, leading nations sent expeditions to remote corners of the globe to time exactly when Venus appeared to begin its transit of the Sun. The precise timing of the transit depended on location because different places on the globe saw the event from different angles. The times were compared and the distance to the Sun calculated using the known distances between expedition locations on the Earth and trigonometry. Educators and students may do the calculations by following an activity on the website or on the half-hour NASA Connect TV program.

The transit phenomenon has relevance to the future of astronomy as well. There is evidence for more than 100 extrasolar planets (planets outside our solar system) around other nearby stars. However, current techniques can only detect large planets, gas giants like Jupiter. But a star might have a planet that appears to pass in front of it by chance alignment with the Earth, and planets similar in size to the Earth could be detected if they transit their parent star.

NASA's Kepler mission, scheduled for launch in October 2007, will allow astronomers to find smaller, presumably terrestrial extrasolar planets by looking for tiny dips in the brightness of a star when a planet crosses in front of it. Periodic brightness dips will signal the presence of a planet in orbit around the star, even if the planet itself is not directly visible. Kepler will observe about 100,000 stars in a patch of sky in the direction of the constellation Cygnus for four years, making brightness measurements every 15 minutes, in hopes of catching elusive transits. The Kepler mission is expected to detect 50 to 60 extrasolar planets with a similar distance from their parent stars as the Earth is from the Sun.