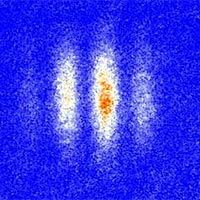 Atoms interfering with themselves. After ultracold atoms are maneuvered into superpositions—each one located in two places simultaneously—they are released to allow interference of each atom’s two “selves.” They are then illuminated with light, which casts a shadow, revealing a characteristic interference pattern, with red representing higher atom density. The variations in density are caused by the alternating constructive and destructive interference between the two “parts” of each atom, magnified by thousands of atoms acting in unison.

Physicists at the National Institute of Standards and Technology (NIST) have demonstrated a novel way of making atoms interfere with each other, recreating a famous experiment originally done with light while also making the atoms do things that light just won’t do. Their experiments showcase some of the extraordinary behavior taken for granted in the quantum world—atoms acting like waves and appearing in two places at once, for starters—and demonstrate a new technique that could be useful in quantum computing with neutral atoms and further studies of atomic hijinks.

The NIST experiments, described in Physical Review Letters,* recreate the historic “double-slit” experiment in which light is directed through two separate openings and the two resulting beams interfere with each other, creating a striped pattern. That experiment is a classic demonstration of light behaving like a wave, and the general technique, called interferometry, is used as a measurement tool in many fields. The NIST team used atoms, which, like light, can behave like particles or waves, and made the wave patterns interfere, or, in one curious situation, not.

Atom interferometers have been made before, but the NIST technique introduces some new twists. The researchers trap about 20,000 ultracold rubidium atoms with optical lattices, a lacework of light formed by three pairs of infrared laser beams that sets up an array of energy “wells,” shaped like an egg carton, that trap the atoms. The lasers are arranged to create two horizontal lattices overlapping like two mesh screens, one twice as fine as the other in one dimension. If one atom is placed in each site of the wider lattice, and those lasers are turned off while the finer lattice is activated, then each site is split into two wells, about 400 nanometers apart. Under the rules of the quantum world, the atom doesn’t choose between the two sites but rather assumes a “superposition,” located in both places simultaneously. Images reveal a characteristic pattern as the two parts of the single superpositioned atom interfere with each other. (The effect is strong enough to image because this is happening to thousands of atoms simultaneously—see image.)

Everything changes when two atoms are placed in each site of the wider lattice, and those sites are split in two. The original atom pair is now in a superposition of three possible arrangements: both atoms on one site, both on the other, and one on each. In the two cases when both atoms are on a single site, they interact with each other, altering the interference pattern—an effect that does not occur with light. The imbalance among the three arrangements creates a strobe-like effect. Depending on how long the atoms are held in the lattice before being released to interfere, the interference pattern flickers on (with stripes) and off (no stripes). A similar “collapse and revival” of an interference pattern was seen in similar experiments done earlier in Germany, but that work did not confine a pair of atoms to a single pair of sites. The NIST experiments allowed researchers to measure the degree to which they had exactly one or exactly two atoms in a single site, and to controllably make exactly two atoms interact. These are important capabilities for making a quantum computer that stores information in individual neutral atoms.