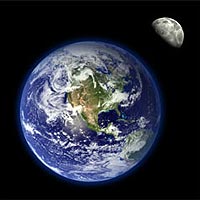 Poets may see 'a face of plaintive sweetness' or 'a cheek like beryl stone' when they look at the moon, but Shaopeng Huang sees something else altogether: the ideal location for a network of observatories dedicated to studying climate change on Earth.

Using data from an Apollo 15 experiment whose original intent was thwarted by unanticipated lunar surface conditions, the University of Michigan geophysicist recently showed that surface temperatures on the near side of the moon accurately record important information about Earth's climate system.

Based on his analysis, recently published online in Advances in Space Research, Huang is calling for an international effort to develop and deploy monitoring stations on the moon for the study of terrestrial climate change.

Global climate change is driven by an imbalance between incoming energy from the sun and outgoing energy from Earth. Without understanding the climate system's inputs and outputs—its so-called energy budget—it is impossible to tease out the relative contributions of natural and human-induced influences and to predict future climate, Huang said.

But detecting changes in the energy budget is difficult with existing ground-based and space-borne technologies, he noted. Fortunately, instruments left behind by the Apollo 15 astronauts—all U-M alumni, incidentally—inadvertently provided just the necessary measurements.

'One of the main scientific objectives of the Apollo 15 mission was to drill two boreholes about three meters into the lunar soil and insert specially designed probes,' Huang said. 'The point was to see how temperature varies with depth, in order to calculate the heat flow outward from the interior of the moon.' But drilling in the moon's powdery soil, or regolith, turned out to be much more difficult than expected.

'The Apollo 15 crew overspent their precious time on the moon for this particular task, yet could only penetrate a little more than half the depth they wanted to reach. When the probes were inserted into the boreholes, several thermometers designed for measuring subsurface temperature ended up measuring surface temperature instead.'

Originally, Huang was interested in the moon borehole data because he and U-M colleague Henry Pollack have been using data from holes bored into Earth to reconstruct Earth's surface temperature history. He thought they might be able to apply techniques developed for that project to reconstruct the moon's surface temperature history. But when he examined the moon data set, he realized it could provide valuable information on Earth's climate shifts.

This allowed him to uncover a lunar night-time warming trend from mid-1972 to late 1975, which was consistent with a global dimming of Earth that occurred over the same period and was due to a general decrease of sunlight over land surfaces. (Widespread ground-based radiation records from that period show that solar radiation reaching Earth's surface during that period decreased significantly, for reasons that are not completely understood.)

Huang's study demonstrated that signals from the energy budget of Earth's climate system are detectable on the moon and can be useful in monitoring and predicting climate change.

For that and other reasons, the moon is the perfect place for a system of observatories, Huang said. 'As the sole natural satellite of Earth, the moon is an enduring platform without complications from atmosphere, hydrosphere or biosphere, and could provide records of Earth's radiation budget that would complement ground-based and man-made satellite records.'

Huang would like to see his findings put to good use—and soon.

'Global warming on Earth is among the most profound scientific, social, economical and political challenges of our time,' he said. 'At the same time, countries around the world are racing to launch missions to the moon. The time could not be better to join forces to create a network of temperature and radiation observatories on the moon for the purpose of studying climate change on Earth.'