Sun In The Middle Galactic Hole? 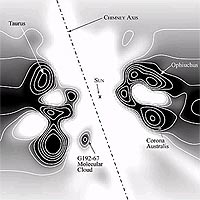 New map of the cold and dense interstellar gas surrounding the local cavity in the plane of the galaxy. White areas represent regions of extremely low gas density (which are probably filled with hot and ionized gas), whereas dark areas reveal where large condensations of cold and dense gas occur. Notice that the local cavity is surrounded by many of these condensations, but this wall is broken in several places by low density ‘interstellar tunnels’ that link the local cavity with other nearby bubble cavities such as the Pleiades and GSH 238+00+09.

The local cavity, when viewed side-on, reveals a tube-like chimney that extends from the galactic plane up into the lower halo region of our galaxy. Such chimneys can act as vents for energetic hot gas produced in supernovas. Courtesy UC Berkeley

The first detailed map of space within about 1,000 light years of Earth places the solar system in the middle of a large hole that pierces the plane of the galaxy, perhaps left by an exploding star one or two million years ago.

The new map, produced by University of California, Berkeley, and French astronomers, alters the reigning view of the solar neighborhood. In that picture, the sun lies in the middle of a hot bubble - a region of million-degree hydrogen gas with 100-1,000 times fewer hydrogen atoms than the average gas density in the Milky Way - and is surrounded by a solid wall of colder, denser gas.

Instead, said astronomer Barry Welsh of UC Berkeley's Space Sciences Laboratory, the region around the sun is an irregular cavity of low-density gas that has tunnels branching off through the surrounding dense gas wall. Welsh and his French colleagues suspect that the interconnecting cavities and tunnels, analogous to the holes in a sponge, were created by supernovas or very strong stellar winds that swept out large regions and, when they encountered one another, merged into passageways.

"When we started mapping gas in the galaxy, we found a deficit of neutral gas within about 500 light years, suggesting that we are in a bubble-shaped cavity perhaps filled with hot, ionized gas," Welsh said. "But the Local Bubble is shaped more like a tube and should be called the Local Chimney."

If this system of interlocking, gaseous cavities is characteristic of the entire galaxy, it presents a dramatic confirmation of a 30-year-old theory of the Milky Way, Welsh said.

Welsh is presenting the findings on Thursday, May 29, at the American Astronomical Society meeting in Nashville, Tenn.

At the moment, the origin of the cavities is anybody's guess, Welsh said. The local cavity has been around for a few million years and could easily have been caused by a supernova punching through the top and bottom of the galactic disk, the intense stellar winds from 10 or so hot stars, a powerful gamma-ray burst, or even a large star moving through the area. Each of these could theoretically sweep dense gas out of the region, leaving only tenuous, ionized hydrogen.

"We used several ground-based telescopes, including the Observatoire de Haute Provence in France, the European Southern Observatory in Chile and the Lick Observatory in California, to detect atoms of gas in interstellar space towards over a 1,000 nearby stars," said Dr. Rosine Lallement, the project leader at the Centre National de la Recherche Scientifique (CNRS) in Paris. "In collaboration with Dr. Barry Welsh at UC Berkeley, this project has taken over five years to accumulate and analyze all the data."

A key factor in mapping the local interstellar space was recent data from the European Hipparcos satellite, which has provided highly accurate distances to nearby stars, improving significantly over distances obtained through ground-based measurement of parallax.

By locating stars that showed no absorption by sodium and those that did, they were able to construct a three-dimensional picture of the edge of the low-density region surrounding our solar system. The 1,005 stars they looked at were all hot, blue Type A and B stars, because it's easier to pick out sodium absorption lines from their spectra.

"Eventually, our measurements towards more distant stars started to pick up large numbers of sodium atoms, indicating that we had stumbled across a dense neutral-gas boundary, or 'wall,' to our local cavity," Welsh said. The nearest wall is 175-190 light years from Earth, in the direction of the center of our galaxy.

"This thin shell of dense gas surrounding the local void is broken in many places," said Dr. Francoise Crifo, an astronomer at the Paris Observatory. "In several directions in the galaxy, our local cavity seems to be linked with other similar empty regions by pathways or tunnels in the interstellar medium."

The existence of a network of tunnels of hot gas that thread interstellar space was first suggested nearly 30 years ago by Don Cox and Barry Smith of the University of Wisconsin. In their model, energetic galactic supernova explosions create fast-moving expanding bubbles of hot gas that collide with the surrounding cold gas of interstellar space, which in turn becomes compressed into thin shells. Eventually, these shells of cold gas meet other expanding hot cavities and break up to form small tunnels or pathways between the expanding voids, Welsh said.

"If you look at the new map of cold, local interstellar gas in the galactic plane, you see an inner empty region with finger-like extensions or tunnels that poke through the surrounding wall and reach into nearby regions of our galaxy, such as the Lupus-Norma, Auriga-Perseus and Scorpius-Centaurus associations of young stars," he said. "These regions are known to contain large amounts of hot and ionized low-density gas that can be detected at radio and ultraviolet wavelengths."

The new results also show that the local void of gas extends out of the galactic disk and stretches into the overlying galactic halo region. In this view of the galaxy, the cavity appears as a tube-like "chimney" that links the gas in the galactic disk with that of the halo. Galactic chimneys have been widely observed in other galaxies and are thought to be responsible for venting the hot and ionized gas expelled in supernova explosions into galaxy halos. Active vents seen in other galaxies have been labeled "galactic fountains" and the gas falling back into the disk, "galactic rain."

"We have been searching for signs of hot gas in this local chimney using the NASA FUSE satellite, and so far, we have found tentative signs of hot gas that seems to be coming towards us, which could be part of a fountain that is falling back onto the galactic plane," Welsh said.

The results of the research are soon to be published in the journal Astronomy and Astrophysics, along with a 3-D map of the distribution of cold sodium gas out to 1,000 light years. Lallement noted, however, that the project is not yet complete.

"We also have information on the motion of the atoms of sodium gas we have detected along the 1,005 sight-lines," she said. "Soon we will be able to say whether the gas wall that surrounds our local void is coming towards the sun and squeezing our local interstellar space, or whether it is moving away from us such that the local void is getting larger."

"Either of these scenarios is fascinating," Welsh said. "If the wall is approaching us, it means that a distant explosive force is pushing it towards us. If it is expanding away from the sun, then it seems possible that a supernova explosion took place about a million years ago that was located relatively close to our sun."

Other colleagues are Daphne Sfeir, who published a preliminary map in 1999 using 350 stars, and J. L. Vergely of ACRI, a high-tech company based in Sofia-Antipolis, France. The group used data from two other telescopes - the Kitt Peak telescope in Arizona and the recently destroyed Mt. Stromlo telescope in Australia.

The research was supported by a National Aeronautics and Space Administration contract with the Johns Hopkins University.