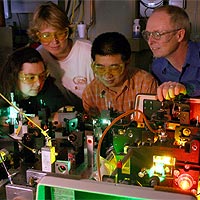 A research team at JILA has developed a new method for making and analyzing an unusual floppy molecule. Shown above with their experimental apparatus are (from left) Chandra Savage, Erin Whitney, Feng Dong, and David Nesbitt.

A laboratory method developed for making and analyzing cold, concentrated samples of a mysterious “floppy” molecule thought to be abundant only in outer space has revealed new data that help explain the molecule’s properties.

The advance, described in the Jan. 6 issue of Science,* is a step toward overcoming a decades-old challenge in chemistry—explaining reactions that occur within very cold clouds among the stars, and perhaps for developing new chemical processes. The paper combines experiments performed by David Nesbitt and colleagues at JILA, a joint institute of the Commerce Department’s National Institute of Standards and Technology (NIST) and University of Colorado at Boulder, with theoretical predictions made with Joel Bowman at Emory University in Atlanta, Ga., and Anne McCoy at The Ohio State University in Columbus, Ohio.

Most molecules have a rigid three-dimensional (3D) structure. The subject of the new study is “protonated” methane, which contains one carbon atom and five hydrogen atoms, one of which is ionized, leaving nothing but a proton (a particle with a positive charge). The five protons from the hydrogen atoms scramble for four bonds around the molecule as if playing a continuous game of musical chairs. In the process, the molecule classically vibrates and rotates in a bizarre manner, morphing between several 3D structures with nearly identical energy levels. (Animation available at http://www.nist.gov/public_affairs/images/floppy_animation.htm.) Chemists have spent decades trying to explain why and how this occurs, a challenge that has seemed insurmountable until recently.

Protonated methane is a so-called “super acid.” This class of molecule has been shown to be more than a million times more powerful than conventional acids and is more effective in inducing reactions that produce solvents and many other important industrial products.

Many theories have been published on the puzzling behavior of this charged molecule (or ion), but experiments must be done to match the ion’s energy characteristics with its physical motions, and such data are difficult to collect and understand. In particular, scientists are interested in how the molecule absorbs different wavelengths of infrared (IR) light, which provides clues about nuclear motion and chemical bonds and structures.

The JILA method generates concentrated amounts of the ion at cold enough temperatures to simplify the complex IR spectrum so it can be analyzed. The data strike a balance between detail and simplicity, providing useful information that is still challenging but easier to understand than ever before. This enabled the authors of the Science paper to match predicted changes in energy to specific vibrations and partially characterize the ion's structure and dynamics. For example, they were able to correlate one intense spectral feature to a transition between two 3D structures with equivalent energy levels.

Previously published spectra of this molecule have either been too low resolution to “see” this motion, or too hot (and therefore too complex) to analyze.

“The experiments have provided the first jet-cooled, high-resolution spectrum of this highly fluxional molecule,” says Nesbitt, a NIST Fellow who led the JILA experimental team. “This has been among the most sought-after IR spectra since the first appearance of this molecule in mass spectrometers over 50 years ago. This is a problem that has occupied many careers; every piece helps.”

The JILA method involves making methane gas at high temperature and pressure, and expanding it into a vacuum to cool the molecules to 10 K (-442 degrees F). The cold molecules then file through an opening just 1 millimeter wide, where they are hit with a “lightning bolt” of electrical current that generates high concentrations of highly reactive ions. The key to mass production is to surround the molecules with enough electrons to make the entire gas mixture neutral in charge, Nesbitt says.

For the analysis step, JILA scientists shine an infrared laser on the cold ions, and detect the light that passes through. The light that is lost, or the small amount absorbed by the molecules, is analyzed to obtain a pattern of absorption at different wavelengths. The technique is very sensitive, thanks to methods for detecting trace absorption of the laser light and manipulating the electrical discharge to maximize the ion concentration levels.

Future and ongoing studies will focus on matching the ion’s IR absorption characteristics with its rotational structure, including end-over-end tumbling. “Protonated methane still has a few tricks up its sleeve,” Nesbitt cautions.

The research was supported in part by the National Science Foundation, Office of Naval Research, and Air Force Office of Scientific Research.

As a non-regulatory agency of the Commerce Department’s Technology Administration, NIST promotes U.S. innovation and industrial competitiveness by advancing measurement science, standards and technology in ways that enhance economic security and improve our quality of life.