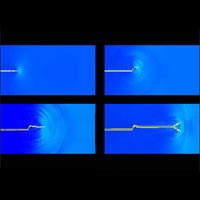 This simulation shows a crack spreading in a brittle material. First the crack creates a clean slice across the surface (upper left), but as it gains speed (other figures, clockwise) it starts to gyrate, and the crack's path becomes increasingly uneven. Image / Markus J. Buehler, MIT

An MIT researcher's atom-by-atom simulation of cracks forming and spreading may help explain how materials fail in nanoscale devices, airplanes and even in the Earth itself during a quake. This work, which could impact a wide range of scientific and engineering disciplines, appears in the Jan. 19 issue of Nature.

'Classical theories of crack dynamics are only valid in a small range of material behavior,' said author Markus J. Buehler, principal investigator in the Atomistic Mechanics Modeling Group in MIT's Department of Civil and Environmental Engineering. 'Our results represent a major breakthrough in understanding how cracks propagate in a variety of brittle materials, and our theory helps explain experimental and computational observations that have been poorly understood so far.'

Past experiments show that cracks start out slow, creating a straight, clean slice across a flat-as-a-mirror surface. As the crack gains speed, at a certain point it starts to gyrate like an out-of-control snake, leaving in its wake an increasingly rough, uneven surface that eventually creates a chaotic branching pattern.

Surprisingly, this phenomenon happens in many different classes of brittle materials, including glasses, ceramics, polymers and semiconductors, but no one has fully understood the physics behind it.

Buehler and Huajian Gao of the Max Planck Institute for Metals Research in Stuttgart, Germany, and now at Brown University, simulated the action of atoms to study how materials behave under extreme conditions. Using massively large-scale molecular dynamics simulations, they uncovered the physics behind fractures and formed a new theory of how cracks propagate in brittle materials.

The researchers discovered that making sense of conflicting studies requires thinking of the material's behavior as hyperelastic, meaning the atomic bonds are close to the breaking point.

'Hyperelasticity, which stems from atoms interacting according to the laws of quantum mechanics, has been neglected in most existing fracture theories,' Buehler said. 'Our results suggest that it is key to unresolved experimental observations in dynamic fracture.

'An important consequence of hyperelasticity is that elastic stiffening behaviors such as those in rubbery materials can have a dramatic effect on the instability dynamics of cracks,' Buehler said. The new study shows that cracks in stiffening materials can suppress the chaotic pattern of spreading cracks and move faster than the speed of sound while creating flat-as-a-mirror surfaces.