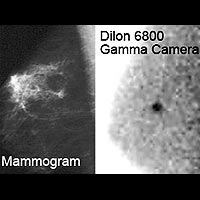 Breast cancer strikes more women in the United States than any other form of cancer - killing more than 40,000 women each year. The first line of defense against the disease is to spot it early. Mammography - which produces x-ray images of the breast - is currently the primary method of breast cancer screening used by doctors.

However, as with all medical tests, mammograms have their weaknesses. Mammograms are generally good at showing abnormalities in the breast, but it may be difficult for even experienced physicians to differentiate benign from malignant growths in some women, such as those with implants or dense breast tissue due to age, scarring or genetics. These and other factors mean that one woman in two will receive a false-positive result after having annual mammograms for a decade, which often result in unnecessary biopsies. Now technology developed at Jefferson Lab is being used to complement mammograms in cases where they are inconclusive, aiding doctors in more accurately diagnosing breast cancer.

The basic technology is called nuclear functional imaging. Jefferson Lab's Detector and Imaging Group began exploring its use as a tool for imaging breast cancer in the late 90s. 'The Detector Group, headed by Stan Majewski, is part of the Physics Division here at Jefferson Lab. We're a support group used throughout the site for Hall A, Hall B, Hall C, even the Accelerator. So as an extension of our expertise, Stan decided he'd like to direct some of our energy not just to nuclear physics, but let's look outside. How else can we contribute?' says Detector Group member Drew Weisenberger.

In nuclear or molecular nuclear medicine imaging, a radiopharmaceutical is used to tag cells in the body. The drug contains a component designed to latch on to cells of interest to doctors and a radioactive agent that releases gamma rays as it decays over time. For example, Technetium-99m-Sestamibi has been found to accumulate in breast tumors. Over time, the Technetium-99m (Tc99m) decays, giving off gamma rays. A medical gamma-ray imager, based on radiation detectors used in Jefferson Lab's experimental halls, can spot these gamma rays and reveal the hidden cancer.
Mitochondria

Cancer cells grow at a faster rate than most other cells in the body. To fuel that growth, cancer cells need more energy-making engines, mitochondria. It's suspected that the radiopharmaceutical Tc99m-Sestamibi attaches to mitochondria. Therefore, cancer cells accumulate more of the drug. Image credit: U.S. National Library of Medicine

This allows nuclear medicine imagers to find cancers in the breast, even lesions as small as 3mm. According to the Detector and Imaging Group's medical physicist, Mark Smith, 'X-ray mammography is basically an anatomical imaging technique, whereas, the imager we [built] is a functional imager. That is, it images where the drug goes, so it indicates something about physiology, which can be different from anatomy.'

At about the same time that the Detector and Imaging Group began branching out to see if their detectors could be used in other medical applications, two businessmen, Dick Ash and Lon Slane, were looking for a new opportunity in the Hampton Roads area. Slane says he was interested in the challenge that comes with taking a basic technology and turning it into a widely used application. 'I went through a startup 30 years ago in industrial electronics that we made very successful. And I reached a point in my life where I was either going to retire or thought I had one more of those things left in me. So I quit a company here that I was managing... to look for potential opportunities,' he says.

A third businessman, Lee Fairchild, joined the two and the trio licensed Jefferson Lab's nuclear imaging technology for their new company, Dilon Technologies. Their initial focus was to design a system for breast imaging. The group procured investor funding for the fledgling company and set out to design and build its product.

Dilon and JLab signed a Cooperative Research and Development Agreement (CRADA), a written agreement between a private company and a government agency to work together on a project, and Dilon and the Detector and Imaging Group went to work perfecting the imaging technique. Slane says the company also spent several years taking the Detector and Imaging Group's technology and engineering it into a compact, user-friendly system that could be easily integrated into breast imaging centers. 'The fundamental technology of imaging has not changed, not at all, but everything that goes around that has,' he says.

The first product is the Dilon 6800 Gamma Camera: a small and portable device for use in the mammography suite, operating room or nuclear medicine department. It is ideally suited for breast imaging, as it is capable of replicating mammography views for direct image correlation - which helps in diagnosis. Additionally, the test is comfortable for patients. They remain seated during the exam, and breast tissue is not compressed during imaging. A special shield is used to contour and stabilize the breast, while at the same time shielding the camera's surface from extraneous signals. Dilon also designed the unit so that it's priced about the same as mammogram x-ray units and could be more easily assembled and delivered to its customers.
Dilon Camera

Breast-Specific Gamma Imaging with the Dilon 6800 Gamma Camera has proven to be an effective tool in the early detection of breast cancer and in the differentiation of malignant and benign tumors. The imaging procedure is covered by most medical insurance.

In the early design phase, the company's founders also spent time obtaining funding and doing small clinical trials to prove that the technology works. Although faced with numerous setbacks due to September 11, an economic downturn and the medical establishment's reluctance to gamble limited resources on a new technology, the company finally sold its first production unit of the Dilon 6800 to a private clinic in Las Vegas in September 2004.

The company spent 2005 beefing up its marketing tactics in an effort to educate medical practitioners in breast cancer diagnostics about the capabilities of Breast Specific Gamma Imaging (BSGI). The effort has paid off: Dilon has since sold about another 25 units, including its first international installation at the Royal Free Hospital in London. 'Now we have customers who say they would never practice breast medicine without it, so it's come a long way,' Slane adds. In addition, the company grew from six employees and a handful of contractors and dealers in 2004 to a dozen employees and numerous contractors and dealers now.

Slane says the technology is very successful at diagnosing breast cancer and is changing patients' prognoses every day. 'We get involved in the diagnosis, is there something there or isn't it? And we also get involved in pre-surgery planning. They've typically used MRI for this, but they're finding there's a better specification on our camera for certain characteristics that will not find as many false positives as MR. To our surprise, also, we're finding that breast surgeons are using the device and are actually requiring imaging on our camera before they do surgery on a woman, a patient, who has been diagnosed with breast cancer,' he says.

Majewski is also happy to see that his vision to have his group's detector technology explored for applications beyond nuclear physics research is having a positive impact on so many lives. He says, 'The main issue is how to keep the balance between different projects and the main mission,' he says, 'It would not be possible for us to do these biomedical imagers, if not for the fact that there is all the core expertise and experience here and resources at a national laboratory. I would say, for our colleagues in academia, it would be much more difficult, if not impossible, for them to achieve the same. This place -- the site, the management decision, and my group's dedication -- made this possible.'

Fred Dylla, JLab's Chief Technology Officer, adds, 'The Detector and Imaging Group's experience with nurturing the start-up of Dilon has been a valuable business lesson for all involved, and the results have helped show the value of nuclear physics.'

News Story Origin and Copyright: JLab
Click here for the original news release.
'Where the telescope ends, the microscope begins. Which of the two has the grander view?'