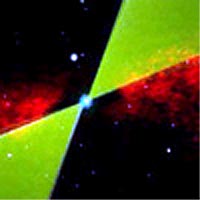 For the first time, the planets orbiting a pulsar have been "weighed" by measuring precisely variations in the time it takes them to complete an orbit, according to a team of astronomers from the California Institute of Technology and Pennsylvania State University.

Reporting at the summer meeting of the American Astronomical Society, Caltech postdoctoral researcher Maciej Konacki and Penn State astronomy professor Alex Wolszczan announced today that masses of two of the three known planets orbiting a rapidly spinning pulsar 1,500 light-years away in the constellation Virgo have been successfully measured. The planets are 4.3 and 3.0 times the mass of Earth, with an error of 5 percent.

The two measured planets are nearly in the same orbital plane. If the third planet is co-planar with the other two, it is about twice the mass of the moon. These results provide compelling evidence that the planets must have evolved from a disk of matter surrounding the pulsar, in a manner similar to that envisioned for planets around sun-like stars, the researchers say.

The three pulsar planets, with their orbits spaced in an almost exact proportion to the spacings between Mercury, Venus, and Earth, comprise a planetary system that is astonishingly similar in appearance to the inner solar system. They are clearly the precursors to any Earth-like planets that might be discovered around nearby sun-like stars by the future space interferometers such as the Space Interferometry Mission or the Terrestrial Planet Finder.

"Surprisingly, the planetary system around the pulsar 1257+12 resembles our own solar system more than any extrasolar planetary system discovered around a sun-like star," Konacki said. "This suggests that planet formation is more universal than anticipated."

The first planets orbiting a star other than the sun were discovered by Wolszczan and Dale Frail (of the National Radio Astronomy Observatory) around an old, rapidly spinning neutron star, PSR B1257+12, during a large search for pulsars conducted in 1990 with the giant, 305-meter Arecibo radio telescope. Neutron stars are often observable as radio pulsars, because they reveal themselves as sources of highly periodic, pulse-like bursts of radio emission. They are extremely compact and dense leftovers from supernova explosions that mark the deaths of massive, normal stars.

The exquisite precision of millisecond pulsars offers a unique opportunity to search for planets and even large asteroids orbiting the pulsar. This "pulsar timing" approach is analogous to the well-known Doppler effect so successfully used by optical astronomers to identify planets around nearby stars. Essentially, the orbiting object induces reflex motion to the pulsar which result in perturbing the arrival times of the pulses. However, just like the Doppler method, the pulsar timing method is sensitive to stellar motions along the line-of-sight, the pulsar timing can only detect pulse arrival time variations caused by a pulsar wobble along the same line. The consequence of this limitation is that one can only measure a projection of the planetary motion onto the line-of-sight and cannot determine the true size of the orbit.

Soon after the discovery of the planets around PSR 1257+12, astronomers realized that the heavier two must interact gravitationally in a measurable way, because of a near 3:2 commensurability of their 66.5- and 98.2-day orbital periods. As the magnitude and the exact pattern of perturbations resulting from this near-resonance condition depend on a mutual orientation of planetary orbits and on planet masses, one can, in principle, extract this information from precise timing observations.

Wolszczan showed the feasibility of this approach in 1994 by demonstrating the presence of the predicted perturbation effect in the timing of the planet pulsar. In fact, it was the first observation of such an effect beyond the solar system, in which resonances between planets and planetary satellites are commonly observed. In recent years, astronomers have also detected examples of gravitational interactions between giant planets around normal stars.

Konacki and Wolszczan applied the resonance-interaction technique to the microsecond-precision timing observations of PSR B1257+12 made between 1990 and 2003 with the giant Arecibo radio telescope. In a paper to appear in theAstrophysical Journal Letters, they demonstrate that the planetary perturbation signature detectable in the timing data is large enough to obtain surprisingly accurate estimates of the masses of the two planets orbiting the pulsar.

The measurements accomplished by Konacki and Wolszczan remove a possibility that the pulsar planets are much more massive, which would be the case if their orbits were oriented more "face-on" with respect to the sky. In fact, these results represent the first unambiguous identification of Earth-sized planets created from a protoplanetary disk beyond the solar system.

Wolszczan said, "This finding and the striking similarity of the appearance of the pulsar system to the inner solar system provide an important guideline for planning the future searches for Earth-like planets around nearby stars."