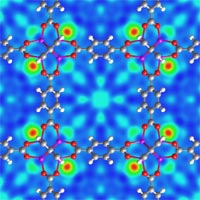 This neutron-scattering image reveals where hydrogen molecules (red-green circles) connect to a metal organic framework (MOF), a type of custom-made compound eyed for hydrogen storage applications. The ball-and-stick model of the MOF is superimposed on the neutron image.

In a step toward making cars that can run on hydrogen rather than gasoline a reality, chemists at UCLA and the University of Michigan have announced a new 'crystal sponge' material that can store in its pores nearly three times more hydrogen than any substance known previously.

Indeed, say UCLA chemist Omar Yaghi and his colleagues, who are scheduled to publish their findings in late March in the Journal of the American Chemical Society, this is the first material to achieve the kind of storage capacities required to make hydrogen fuel practical. The fully saturated crystal sponge is 7.5 percent hydrogen by weight.

The payoff could be hydrogen fuel that powers not only cars, but laptop computers, cellular phones, digital cameras and other electronic devices as well.

For now, notes Yaghi, the high storage densities are possible only at very low temperatures, below 77 degrees Kelvin (-321 degrees Fahrenheit). But he is optimistic the limitation is temporary.

This particular material is just one in a large class of compounds he invented in the early 1990s, Yaghi explains. Known as metal-organic frameworks (MOFs), they have a crystal structure that resembles a scaffold made of linked rods -- a structure that gives them a multitude of nanoscale pores, and a correspondingly huge internal surface area where gas molecules can attach. (A pinch of a MOF has roughly the surface area of a football field.)

But the precise details of that structure can be tailored quite easily by changing the starting materials, Yaghi says; his laboratory has already made more than 500 different MOFs over the years-few of which have even been tested for hydrogen storage. So, he believes it's possible to modify the rod-like components to store hydrogen at everyday temperatures.

This research was funded by the National Science Foundation, the U.S. Department of Energy and BASF, a global chemical company based in Germany.

Chemists at UCLA and the University of Michigan report an advance toward the goal of cars that run on hydrogen rather than gasoline. While the U.S. Department of Energy estimates that practical hydrogen fuel will require concentrations of at least 6.5 percent, the chemists have achieved concentrations of 7.5 percent — nearly three times as much as has been reported previously — but at a very low temperature (77 degrees Kelvin).

The research, scheduled to be published in late March in the Journal of the American Chemical Society, could lead to a hydrogen fuel that powers not only cars, but laptop computers, cellular phones, digital cameras and other electronic devices as well.

'We have a class of materials in which we can change the components nearly at will,' said Omar Yaghi, UCLA professor of chemistry, who conducted the research with colleagues at the University of Michigan. 'There is no other class of materials where one can do that. The exciting discovery we are reporting is that, using a new material, we have identified a clear path for how to get above seven percent of the material's weight in hydrogen.'

The materials, which Yaghi invented in the early 1990s, are called metal-organic frameworks (MOFs), pronounced 'moffs,' which are like scaffolds made of linked rods — a structure that maximizes the surface area. MOFs, which have been described as crystal sponges, have pores, openings on the nanoscale in which Yaghi and his colleagues can store gases that are usually difficult to store and transport. MOFs can be made highly porous to increase their storage capacity; one gram of a MOF has the surface area of a football field! Yaghi's laboratory has made more than 500 MOFs, with a variety of properties and structures.

'We have achieved 7.5 percent hydrogen; we want to achieve this percent at ambient temperatures,' said Yaghi, a member of the California NanoSystems Institute. 'We can store significantly more hydrogen with the MOF material than without the MOF.'

MOFs can be made from low-cost ingredients, such as zinc oxide — a common ingredient in sunscreen — and terephthalate, which is found in plastic soda bottles.

'MOFs will have many applications. Molecules can go in and out of them unobstructed. We can make polymers inside the pores with well-defined and predictable properties. There is no limit to what structures we can get, and thus no limit to the applications.'

'A decade ago, people thought methane would be impossible to store; that problem has been largely solved by our MOF materials. Hydrogen is a little more challenging than methane, but I am optimistic.'

Yaghi, 41, has reason to be optimistic since only a handful of MOFs have been tested for hydrogen storage thus far. This is not unreasonable given that MOFs are composed of an inorganic component — a metal oxide — and an organic component; he can control their assembly into new structures nearly at will.

How would hydrogen work in devices like cell phones, laptop computers and digital cameras?

'Instead of a battery, one would have a medium such as MOF that stores hydrogen and releases it into a fuel cell,' he said.

Yaghi, whose research overlaps chemistry, materials science and engineering, has long been interested in making materials in a rational way.

'When I started out in chemistry, I always thought it should be possible to take two well-defined molecules as building blocks and stitch them together into a predetermined chemical structure — almost like you produce a blueprint of the structure ahead of time and then find the right building blocks necessary to build it. In this way, one can control the structure and the composition. This approach was difficult to implement at the beginning, but is not so difficult at this stage.'

Hydrogen, when burned, produces only water, which is harmless to the environment, Yaghi noted. With MOFs, hydrogen is physically absorbed, and it is easy to take the hydrogen out and put it back in without much energy cost, he said.

'The challenge has been, how do you store enough hydrogen for an automobile to run for 300 to 400 miles without refueling?' Yaghi asked. 'You have to concentrate the hydrogen into a small volume without using high pressure of very low temperature.

'Our idea was to create a material with pores that attract hydrogen, making it possible to stuff more hydrogen molecules into a small volume,' he said.

'We have materials that exceed the DOE requirements for methane, and we think we can apply the same sort of strategy for hydrogen storage,' he said.

Additionally, Yaghi has shown that MOFs store prodigious amounts of carbon dioxide at ambient conditions, a development relevant to preventing carbon dioxide emissions from power plants and automobile tailpipes from reaching the atmosphere.

The research was funded by the National Science Foundation, the U.S. Department of Energy and BASF (a global chemical company based in Germany).

Co-authors of the present research report, which Yaghi conducted when he was on the faculty at the University of Michigan, are Adam Matzger, assistant professor of chemistry at Michigan, and Antek Wong-Foy, chemistry research associate at Michigan.