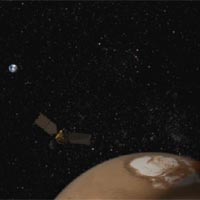 With a crucially timed firing of its main engines on March 10th, NASA's new mission to Mars successfully put itself into orbit around the red planet.

Signals received from the spacecraft at 2:16 p.m. Pacific Time after it emerged from its first pass behind Mars set off cheers and applause in control rooms at NASA's Jet Propulsion Laboratory, Pasadena, Calif., and at Lockheed Martin Space Systems, Denver.

'This is a great milestone to have accomplished, but it's just one of many milestones before we can open the champagne,' said Colleen Hartman, deputy associate administrator for NASA's Science Mission Directorate. 'Once we are in the prime science orbit, the spacecraft will perform observations of the atmosphere, surface, and subsurface of Mars in unprecedented detail.'

The spacecraft traveled about 500 million kilometers (310 million miles) to reach Mars after its launch from Florida on Aug. 12, 2005. It needed to use its main thrusters as it neared the planet in order to slow itself enough for Mars' gravity to capture it. The thruster firing began while the spacecraft was still in radio contact with Earth, but needed to end during a tense half hour of radio silence while the spacecraft flew behind Mars.

'Our spacecraft has finally become an orbiter,' said JPL's Jim Graf, project manager for the mission. 'The celebration feels great, but it will be very brief because before we start our main science phase, we still have six months of challenging work to adjust the orbit to the right size and shape.'

For the next half-year, the mission will use hundreds of carefully calculated dips into Mars' atmosphere in a process called 'aerobraking.' This will shrink its orbit from the elongated ellipse it is now flying, to a nearly circular two-hour orbit. For the mission's principal science phase, scheduled to begin in November, the desired orbit is a nearly circular loop ranging from 320 kilometers (199 miles) to 255 kilometers (158 miles) in altitude, lower than any previous Mars orbiter. To go directly into such an orbit instead of using aerobraking, the mission would have needed to carry about 70 percent more fuel when it launched.

The instruments on Mars Reconnaissance Orbiter will examine the planet from this low-altitude orbit. A spectrometer will map water-related minerals in patches as small as a baseball infield. A radar instrument will probe for underground layers of rock and water. One telescopic camera will resolve features as small as a card table. Another will put the highest-resolution images into broader context. A color camera will monitor the entire planet daily for changes in weather. A radiometer will check each layer of the atmosphere for variations in temperature, water vapor and dust.

'The missions currently at Mars have each advanced what we know about the presence and history of water on Mars, and one of the main goals for Mars Reconnaissance Orbiter is to decipher when water was on the surface and where it is now,' said JPL's Dr. Richard Zurek, project scientist for the mission. 'Water is essential for life, so that will help focus future studies of whether Mars has ever supported life.'

The orbiter can radio data to Earth at up to 10 times the rate of any previous Mars mission. Besides sending home the pictures and other information from its own investigations, it will relay data from surface missions, including NASA's Phoenix Mars Scout scheduled for launch in 2007 and Mars Science Laboratory in development for 2009.