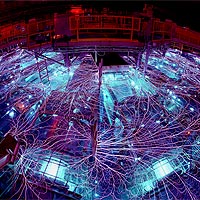 Sandia’s Z machine has produced plasmas that exceed temperatures of 2 billion degrees Kelvin — hotter than the interiors of stars.

The unexpectedly hot output, if its cause were understood and harnessed, could eventually mean that smaller, less costly nuclear fusion plants would produce the same amount of energy as larger plants.

The phenomena also may explain how astrophysical entities like solar flares maintain their extreme temperatures.

'At first, we were disbelieving,' says Sandia project lead Chris Deeney. 'We repeated the experiment many times to make sure we had a true result and not an ‘Ooops’!'

The results, recorded by spectrometers and confirmed by computer models created by John Apruzese and colleagues at Naval Research Laboratory, have held up over 14 months of additional tests.

A description of the achievement, as well as a possible explanation by Sandia consultant Malcolm Haines, well-known for his work in Z pinches at the Imperial College in London, appeared in the Feb. 24 Physical Review Letters.

What happened and why?

First, the radiated x-ray output was as much as four times the expected kinetic energy input.

Ordinarily, in non-nuclear reactions, output energies are less — not greater — than the total input energies. More energy had to be getting in to balance the books, but from where could it come?

Second, and more unusually, high ion temperatures were sustained after the plasma had stagnated — that is, after its ions had presumably lost motion and therefore energy and therefore heat — as though yet again some unknown agent was providing an additional energy source to the ions.

Sandia’s Z machine normally works like this: 20 million amps of electricity pass through a small core of vertical tungsten wires finer than human hairs. The core is about the size of a spool of thread. The wires dissolve instantly into a cloud of charged particles called a plasma.

The plasma, caught in the grip of the very strong magnetic field accompanying the electrical current, is compressed to the thickness of a pencil lead. This happens very rapidly, at a velocity that would fly a plane from New York to San Francisco in several seconds.

At that point, the ions and electrons have nowhere further to go. Like a speeding car hitting a brick wall, they stop suddenly, releasing energy in the form of X-rays that reach temperatures of several million degrees — the temperature of solar flares.

The new achievement — temperatures of billions of degrees — was obtained in part by substituting steel wires in cylindrical arrays 55 mm to 80 mm in diameter for the more typical tungsten wire arrays, approximately only 20 mm in diameter. The higher velocities achieved over these longer distances were part of the reason for the higher temperatures.

(The use of steel allowed for detailed spectroscopic measurements of these temperatures impossible to obtain with tungsten.)

Haines theorized that the rapid conversion of magnetic energy to a very high ion plasma temperature was achieved by unexpected instabilities at the point of ordinary stagnation: that is, the point at which ions and electrons should have been unable to travel further. The plasma should have collapsed, its internal energy radiated away. But for approximately 10 nanoseconds, some unknown energy was still pushing back against the magnetic field.

Haines’ explanation theorizes that Z’s magnetic energies create microturbulences that increase the kinetic energies of ions caught in the field’s grip. Already hot, the extra jolt of kinetic energy then produces increased heat, as ions and their accompanying electrons release energy through friction-like viscous mixing even after they should have been exhausted.

High temperatures previously had been assumed to be produced entirely by the kinetic flight and intersection of ions and electrons, unaided by accompanying microturbulent fields.

Z is housed in a flat-roofed building about the size and shape of an aging high-school gymnasium.

This work has already prompted other studies at Sandia and at the University of Nevada at Reno.

News Story Origin and Copyright: SANDIA
Click here for the original news release.
'Where the telescope ends, the microscope begins. Which of the two has the grander view?'