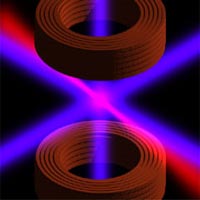 Scientists at the National Institute of Standards and Technology (NIST) working with Russian colleagues have significantly improved the design of optical atomic clocks that hold thousands of atoms in a lattice made of intersecting laser beams. The design, in which ytterbium atoms oscillate or “tick” at optical frequencies, has the potential to be more stable and accurate than today’s best time standards, which are based on microwaves at much lower frequencies. More accurate time standards could improve communications, enhance navigation systems, and enable new tests of physical theories, among other applications.

Described in two papers in the March 3 issue of Physical Review Letters,* the heart of the clock consists of about 1,000 pancake-shaped wells made of laser light and arranged in a single line, each containing about 10 atoms of the heavy metal ytterbium. The lattice design results in fewer systematic errors than optical atomic clocks using moving balls of cold atoms, and also offers advantages in parallel processing over other approaches using single charged atoms (ions). The optical lattice, created by an intense near-visible laser beam, is loaded by first slowing down the atoms with violet laser light and then using green laser light to further cool the atoms so that they can be captured. Scientists detect the atoms’ “ticks” (518 quadrillion per second) by bathing them in yellow light at slightly different frequencies until they find the exact “resonant” frequency (or color) that the atoms absorb best.

Previous lattice-based clocks have used atoms with odd-numbered atomic masses, which have a nuclear magnetic field that causes some additional complications. The new clock uses atoms with even-numbered atomic masses that have no net nuclear magnetic field but have been difficult to use in atomic clocks until now. The researchers found they could apply a small external magnetic field combined with yellow laser light to induce an otherwise “forbidden” oscillation between two energy levels in the atoms. The team reported an extremely precise resonance frequency with a strong signal that demonstrates the clock’s potential for very high stability. The new approach is also applicable to other atoms with even-numbered atomic masses, such as strontium and calcium, which are under study at NIST and other research laboratories around the world.

The Russian guest researchers are affiliated with the Institute of Laser Physics of the Siberian Branch of the Russian Academy of Sciences and Novosibirsk State University, both in Novosibirsk, Russia. The work was supported in part by the National Research Council and Russian Fund for Basic Research.