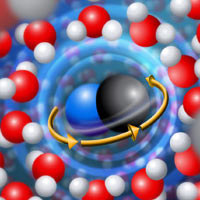 Each rotating cyanide ion creates a shock wave that throws back the surrounding water molecules, allowing it to spin for a time with essentially no friction.

Researchers at USC and Brown University said they have achieved near-frictionless motion in water by using lasers to spin a molecule like a propeller.

Free rotation can occur in gases, where molecules are far apart. This is the first known demonstration of friction turning off in a room temperature liquid, the authors report in the March 31 issue of Science.

Graduate student Amy Moskun and her adviser Stephen Bradforth, associate professor of chemistry in the USC College of Letters, Arts and Sciences, used ultra-short, high-energy laser pulses to spin a CN “diatomic” – a simple molecular stick with a carbon at one end and a nitrogen at the other.

Within the first quarter-turn, the molecular stick creates a shock wave, throwing back the water molecules that had been crowding it.

“If you give it enough spin, it pushes all the guys around it away,” said Bradforth, “and it builds itself a little bubble. It’s destroyed the friction in the liquid around it by completely reshaping its environment.”

Bradforth likened the phenomenon to a passenger swinging a suitcase around in a crowded airport terminal, minus the real-life bruises and hurt feelings.

As with the airport analogy, after some time – about 10 complete rotations of the CN molecule – the shock dissipates and the water molecules rush back in.

Even so, Bradforth said, the length of friction-free spinning was far greater than expected.

“Everyone’s prediction was that it wouldn’t even complete a few degrees of free rotation,” he said.

The discovery has no immediate practical use, but since 90 percent of reactions take place in liquid solutions, Bradforth said his group’s study “impacts how we think about the vast majority of chemical reactions.”

In chemistry, friction is a useful phenomenon that transfers energy between molecules and allows reactions to proceed. But what if a reaction needs to be stopped or delayed? Chemists have long sought to manipulate reactions, which usually yield useless byproducts along with the desired compound.

The Science paper provides a potential new tool, since one way to influence the progress of a reaction is to isolate a molecule from its surroundings.

“Most people thought this was hopeless in a liquid,” Bradforth said.

It took the researchers more than a year to grasp the significance of their work. After Moskun and Bradforth figured out how to spin up CN molecules and to observe the rotation with a strobe-like apparatus, they sent their data to Richard Stratt, professor of chemistry at Brown University.

Stratt’s group of theoretical chemists showed that the data represents a violation of linear response theory, a key model for liquid behavior that states the effects of friction and molecular energy are scalable. Under the theory, a mere increase in the rotational speed of a molecule should not cause a fundamental change in its environment.

“People have seen linear response theory fail in simulations before,” Stratt wrote in a summary for the researchers’ funding agency, the National Science Foundation. “I believe these studies represent the first time anyone has ever seen that a particular, well-defined, molecular event was responsible for suddenly turning off a liquid’s linear response behavior.”

The USC group then verified their collaborators’ interpretation with a new round of experiments.

“The theory fails in this case,' Bradforth said, 'and we can see why it fails.”

Bradforth and Stratt were co-authors on the Science paper, along with graduate students Moskun and Askat Jailaubekov from USC, and Guohua Tao from Brown.

Additional funding for Bradforth’s group came from the David and Lucile Packard Foundation.