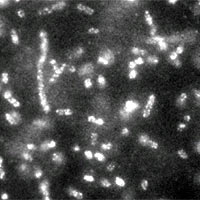 This fluorescence micrograph shows phage-quantum dot complexes (bright spots) bound to E. coli cells (cylindrical shapes). The NCI/NIST method of tagging cells with quantum dots can be used to identify bacteria much faster than conventional methods. The fluorescence signal is strong and stable for hours, enabling scientists to count the number of phage viruses bound to a cell.

A rapid method for detecting and identifying very small numbers of diverse bacteria, from anthrax to E. coli, has been developed by scientists from the National Cancer Institute (NCI) and National Institute of Standards and Technology (NIST). Described in the March 28 issue of Proceedings of the National Academy of Sciences,* the work could lead to the development of handheld devices for accelerated identification of biological weapons and antibiotic-resistant or virulent strains of bacteria—situations where speed is essential.

Traditional ways of identifying infectious bacteria and their possible treatments can be time consuming and laborious, requiring the isolation and growth of the bacteria over many hours or even days. The new method speeds up the process by using fast-replicating viruses (called bacteriophages or phages) that infect specific bacteria of interest and are genetically engineered to bind to 'quantum dots.' Quantum dots are nanoscale semiconductor particles that give off stronger and more intense signals than conventional fluorescent tags and also are more stable when exposed to light. The method detects and identifies 10, or fewer, target bacterial cells per milliliter of sample in only about an hour.

The phages were genetically engineered to produce a specific protein on their surface. When these phages infect bacteria and reproduce, the bacteria burst and release many phage progeny attached to biotin (vitamin H), which is present in all living cells. The biotin-capped phages selectively attract specially treated quantum dots, which absorb light efficiently over a wide frequency range and re-emit it in a single color that depends on particle size. The resulting phage-quantum dot complexes can be detected and counted using microscopy, spectroscopy or flow cytometry, and the results used to identify the bacteria. The new method could be extended to identify multiple bacterial strains simultaneously by pairing different phages with quantum dots that have different emission colors.

The new method is more sensitive than conventional optical methods. It can count how many viruses are infecting a single bacteria cell and how many quantum dots are attached to a single virus. A provisional patent application was filed originally through NIST, and a non-provisional patent application was filed more recently through the National Institutes of Health, the parent agency of NCI. The NIST contributions to the work include experimental design and fluorescence imaging. Other authors are from NCI, NIH, SAIC-Frederick Inc. and the National Cancer Institute at Frederick.

The work was funded by NIH, NCI, NIST, and the Center for Cancer Research.

News Story Origin and Copyright: NIST
Click here for the original news release.
'On the mountains of truth you can never climb in vain: either you will reach a point higher up today, or you will be training your powers so that you will be able to climb higher tomorrow.'