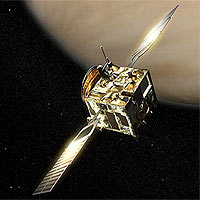 Venus Express will make unprecedented studies of the largely unkown phenomena taking place in the Venusian atmosphere. Its suit of instruments will also dig into the interaction between the solar wind and the planetary environment. Finally, the mission will gather glimpses about the planet's surface, so dense that it is striclty coupled with the atmosphere.

It was on 9 November last year that ESA's Venus Express spacecraft lifted off from the desert of Kazakhstan onboard a Soyuz-Fregat rocket. Now, after having travelled 400 million kilometres in only about five months, the spacecraft is about to reach its final destination. The rendezvous is due to take place on 11 April.

To begin to explore our Earth’s hot and hazy sister planet, Venus Express must complete a critical first step, the most challenging one following launch. This involves a set of complex operations and manoeuvres that will inject the spacecraft into orbit. The Venus Orbit Insertion (VOI) manoeuvre allows the spacecraft to reduce its speed relative to Venus, so that it can be captured by the planet’s gravitation. The manoeuvre is a critical one which must proceed at precisely the right place and time.

The VOI phase officially started on 4 April and will not be completed until 13 April. It is split into three main sub-phases. The first consists in preparing or initialising the spacecraft for the actual capture manoeuvre so as to avoid the risk of the spacecraft going into safe mode, should parameters unrelated to VOI go off-range.

The capture manoeuvre itself consists of a main-engine burn lasting about 50 minutes on the morning of 11 April starting at 09:17 (Central European Summer Time). This is the second main VOI sub-phase.

The final sub-phase will be restoring all spacecraft functions, notably resuming communications with Earth and uplinking the commands to be executed during the preliminary ‘capture’ orbit.

Orbital capture is controlled by an automatic sequence of predefined commands, uploaded to the spacecraft four days prior to VOI. This sequence is the minimum set needed to perform the main-engine burn.

All spacecraft operations are controlled and commanded by the ground control team located at ESA’s European Spacecraft Operations Centre (ESOC) in Darmstadt, Germany.

Timeline of major VOI events (some times subject to change)

4 April, spacecraft transmitter connected to low gain antenna is switched on. During its interplanetary cruise and during the scientific part of the mission to come, Venus Express communicates with Earth by means of its two high gain antennas. However, during the orbit capture phase (11 April), these two antennas become unusable because of the spacecraft’s required orientation at that time.

The low gain antenna, carrying a feeble but instantly recognisable signal, will be transmitting throughout all VOI manoeuvres. This will allow ground controllers to monitor the velocity change during the burn, using NASA’s Deep Space Network’s 70-metre antenna near Madrid, Spain. No other means of communication with the Earth is possible during the capture burn.

5 and 9 April, targeting control manoeuvres. Two time slots are available to adjust course if needed. Given the high accuracy of the course correction performed end of March, Venus Express is currently on the right trajectory for a successful capture into orbit and it is therefore unlikely that either of these two extra slots will be required.

10 to 11 April, final preparations for VOI manoeuvre. 24 to 12 hours before VOI, spacecraft controllers will command Venus Express into its final configuration for the burn. Over the final 12 hours, they will monitor its status, ready to deal with any contingencies requiring last-minute trajectory correction or any revising of the main-engine burn duration.

11 April, 08:03 (CEST), ‘slew’ manoeuvre. This manoeuvre lasts about half an hour and rotates Venus Express so that the main engine faces the direction of motion. Thanks to this, the burn will slow down (rather than accelerate) the spacecraft.

11 April, 09:17 (CEST), main-engine burn starts. A few minutes after firing of the spacecraft thrusters to make sure the propellant settles in the feed lines to the main engine, the latter will begin its 50-minute long burn, ending at 10:07.

This thrust will reduce the initial velocity of 29 000 kilometres per hour (in relation to Venus) by 15 percent, allowing capture. Venus Express will settle into its preliminary, elongated nine-day orbit. On capture, it will be at about 120 million kilometres from the Earth and, at its nearest point, within 400 km of the surface of Venus.

During the burn, at 09:45 (CEST), Venus Express will disappear behind the planet and will not be visible from Earth. This is known as its ‘occultation’ period. The spacecraft will re-emerge from behind Venus’s disc some ten minutes later. So, even with the low gain antenna’s signal, it will only be visible during the first half of the burn and the last six minutes. Receiving the spacecraft signal after the occultation period will be the first positive sign of successful orbit insertion.

11 April, h 11:13 (CEST), re-establish communication with Earth. At the end of the burn, Venus Express still has to perform a few automatic operations. These re-orient the solar panels towards the sun and one of the high gain antennas (the smaller High Gain Antenna 2) towards Earth. If everything goes as expected, at 11:13 the spacecraft should be able to establish its first communication link with ESA’s Cebreros ground station near Madrid. Over the next few hours, it will send much-awaited information about its state of health. Information about its actual trajectory will be available from ESOC’s flight dynamics team around 12:30 (CEST).

12 to 13 April 2006, full reactivation starts. During the 24 hours following orbital capture, time will be devoted to reactivating all spacecraft functions, including all internal monitoring capacity. By the morning of the 13th, the larger ‘High Gain Antenna 1, hitherto unused, will be oriented and fed by the transmitter to communicate with Earth. The two high gain antennas, located on different sides of the spacecraft, will be used alternately during the mission, to avoid exposure to the sun of critical equipment on the outside.

A series of further manoeuvres and many more days will be required to settle Venus Express into its final orbit. The preliminary nine-day orbit is elliptical, ranging from 350 000 kilometres at its furthest point from the planet (apocentre) to less than 400 kilometres at its closest (pericentre).

During this period, Venus Express will also have to perform seven burns (two with the main engine, five with its banks of thrusters) to gradually reduce the apocentre of the following orbits. Final orbit will be reached on 7 May after 16 loops around the planet. It will be a polar orbit, ranging from 66 000 to 250 kilometres from Venus and with a pericentre located at above latitude 80°North.

On 22 April, Venus Express will start its in-orbit commissioning phase. Its instruments will be switched on one by one for detailed checking until 13 May, then operated all together or in groups. This allows simultaneous observation of phenomena to be tested, to be ready for the nominal science phase beginning on 4 June.

The preliminary nine-day polar orbit will be a great opportunity to perform scientific observations. These will proceed only if other critical operations of the spacecraft do not take priority, and in any case not before 30 hours after VOI. The first opportunity to gather scientific data will be on 12-13 April.

During this preliminary orbit phase, the complete disc of Venus will be fully visible for the spacecraft’s imaging instruments, an opportunity that will not occur during the nominal mission, when the range of distances from the planet will be smaller. Such observations will mainly cover the southern hemisphere, which was inadequately studied on previous missions.

In particular, the geometry of the capture orbit makes it possible to observe the dynamics of the Venusian atmosphere continuously and thoroughly from a greater distance, over a duration even longer than the full rotation cycle of the atmosphere at the cloud tops (the still-unexplained four-day ‘super rotation’). Indeed, atmospheric study is one of the mission’s prime goals.

For instance, from distances greater than 200 000 kilometres, the visible/near-infrared mapping spectrometer (VIRTIS) will be able to take snapshots of the entire planetary disc and atmosphere. During the nominal science phase, images of the atmosphere will need to be built up in mosaics.

The analyser of space plasma and energetic atoms (ASPERA) will have an unprecedented opportunity to study from great distances the unperturbed solar wind and to gather data on the atmospheric escape processes on a planet which has no magnetic protection.

In the capture orbit, all the instruments (except the VeRA radio science experiment and PFS spectrometer) may perform observations for a few hours a day on selected dates.

…and plenty of science to come

Venus Express is designed to carry out scientific observations over two Venusian days, corresponding to 486 Earth days. The mission could be extended to double the nominal duration.

Notwithstanding the intense previous exploration (Venus is the third most visited celestial body in our solar system after the Moon and Mars), a plethora of mysteries still surround this planet. Venus Express’s unique instruments for planetary investigation are tailored to taking advantage of clues from previous missions and investigating the planet’s oddities with unprecedented precision.

The instruments onboard, the spacecraft’s ‘eyes’, include a combination of spectrometers (the PFS planetary fourier spectrometer and the SpicaV/SOIR ultraviolet and infrared atmospheric spectrometer), spectro-imagers (VIRTIS ultraviolet /visible/near-infrared mapping spectrometer) and imagers (VMC Venus monitoring Camera).

They are extremely sensitive in a wide range of electromagnetic wavelengths from ultraviolet to infrared and will allow detailed study of the Venusian atmosphere and its interaction with the surface. Also onboard are the MAG magnetometer, the ASPERA analyser of space plasma & energetic atoms and the VeRA radio science experiment, to study all interaction between the atmosphere and the ever-blowing solar wind.

Venus Express will take advantage, for the first time ever, of the so-called ‘infrared windows’, which are narrow atmospheric bands in the infrared part of the spectrum. Through these, precious information about the lower layers of the atmosphere and even the surface can be gathered.

The Venus Express mission will help find answers to several unsolved questions. How does the complex atmospheric dynamics and cloud system work? What causes the fast “super-rotation” of the atmosphere at the cloud top? And what is the origin of the double vortex at the north pole?

Venus Express will also investigate the processes that determine the chemistry of the noxious Venusian atmosphere, which can be as hot as 500°C at the surface and is mainly composed of carbon dioxide, with clouds of sulphuric acid drops. It will study what role the greatest greenhouse effect in the solar system plays in the overall evolution of the Venusian climate. It will also help us to ascertain whether Venus provides a possible preview of a future Earth.

Lastly, through combined analysis of the dense atmosphere and surface, Venus Express will help us to understand the planet’s geology and ascertain there are signs of present volcanic or seismic activity.

During the course of the nominal mission, Venus Express will communicate with Earth via ESA’s Cebreros ground station near Madrid. ESA’s New Norcia station in Australia will be used to support the VeRA radio science experiment.