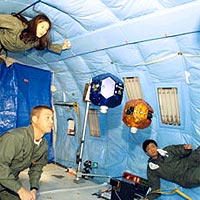 A Russian rocket launched Monday, April 24, is carrying the first of three small, spherical satellites developed at MIT to the International Space Station -- a major step toward building space-based robotic telescopes and other systems.

The MIT SPHERES project -- the acronym stands for Synchronized Position Hold Engage Re-orient Experimental Satellites -- involves satellites about the size of volleyballs that are designed to float weightless in space while maintaining a precise position. A gang of such instruments, floating free in space, could serve as parts of a massive telescope looking for planets near other stars.

Launched from the Baikonur facility in Kazakhstan, the rocket with the satellites is expected to dock with the station today, April 26.

The first critical test of the SPHERE is set for Thursday, May 18 -- inside the space station. Two additional SPHERES are scheduled to reach the space station, carried up by the U.S. space shuttle, before the end of the year.

'We're doing this because these missions have a lot of new, untried technology,' said David W. Miller, an associate professor in MIT's Department of Aeronautics and Astronautics. 'Testing inside the space station will allow us to mature these technologies in a less risky micro-gravity environment,' meaning inside the warm, air-filled station, rather than outside in the hazardous conditions of space.

Eventually, such autonomous space vehicles will fly on their own -- in formation in orbit -- and maintain their positions via radio links, interacting almost constantly to stay where they belong in relation to each other. Like a huge multiple-mirror telescope, each element will be 'tweaked' frequently to keep the overall instrument 'in tune.'

The SPHERES were originally prototyped by undergraduate students at MIT. Subsequently, the flight SPHERES were built by MIT graduate students and Payload Systems Inc. of Cambridge, Mass., but launch was delayed for years by loss of the shuttle Columbia, and by a very crowded launch schedule. In the meantime, all the original students on the project have graduated, all but one have left MIT, and the technology has been steadily refined.

Two astronauts -- one from NASA, the other from the European Space Agency -- have already been trained to run the first experiments with SPHERES adrift inside the space station. According to Miller, an ultrasound system -- rather than a radio-based system -- was also installed inside the space station, so the SPHERES floating untethered have something to tell them where they are as they're being tested in micro-gravity. The goal is to have them hover in space, not drifting 'off station' by more than 1 centimeter.

'Our first test session, with astronauts getting it out to fly, will be May 18. That will be a check-up for the SPHERE,' Miller said. Then 'there will be some single-sphere maneuvers, such as rudimentary docking, inside the space station,' where it should perform 'with the same kind of resolution that the space radio system will have.'

Earlier flight tests, involving some of the MIT students who helped develop the experimental SPHERES, were conducted aboard the 'vomit comet,' a KC-135 tanker plane that NASA uses to give astronauts their first experience with weightlessness.

Now only one of the original students works at MIT: Alvar Saenz-Otero, a postdoctoral associate in aeronautics and astronautics, is managing the project. Graduate students currently working on the project are Simon Nolet, Mark Hilstad, Swati Mohan, Nick Hoff and Georges Aoude. Miller and Professor Jonathan How are the participating faculty.

Scientists envision using SPHERES' mechanical offspring as talented robots that can come together to work on construction projects, repair damage, refuel other satellites or work as parts of other systems -- including telescopes of unprecedented size.

These first SPHERES serve as prototypes for bigger instrument packages that will be spread out in space to work together.

Miller, who is also director of MIT's Space Systems Laboratory, said the two other identical test SPHERES will be carried up to the space station on Saturday, July 1, the other on Thursday, Dec. 14, if shuttle launches occur as planned. One goal is to refine and test the technology for use with the bigger, more complex spheres yet to come.

Before the SPHERES finally got off the ground this week, the project encountered several delays. 'They were ready to go in 2003,' Miller said, but then the Space Shuttle Columbia disintegrated in the blazing heat of re-entry, killing the astronauts on board and setting the U.S. space program back by years. Of course, there's no guarantee that all of the SPHERES will get aloft now, Miller said. There is huge demand for cargo space, especially aboard the shuttles, but launch delays because of technical problems, or simply the weather, are common.