Pieces of NASA's Next Mars Mission are Coming Together 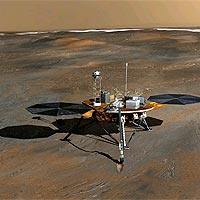 NASA's Phoenix Mars Lander, the next mission to the surface of Mars, is beginning a new phase in preparation for a launch in August 2007.

As part of this 'assembly, test and launch operations' phase, Phoenix team members are beginning to add complex subsystems such as the flight computer, power systems and science instruments to the main structure of the spacecraft. The work combines efforts of Lockheed Martin Space Systems, Denver; the University of Arizona, Tucson; and NASA's Jet Propulsion Laboratory, Pasadena, Calif.

'All the subsystems and instruments from a wide range of suppliers are tested separately, but now we are beginning the vital stage of assembling them together and testing how they will function with each other,' said JPL's Barry Goldstein, project manager for Phoenix.

'We know there is plenty of water frozen into the surface layer of Mars at high latitudes. We've designed Phoenix to tell us more about this region as a possible habitat for life,' said the University of Arizona's Peter Smith, principal investigator for the mission.

Phoenix is the first mission of NASA's Mars Scout Program of competitively proposed, relatively low-cost missions to Mars. The program is currently soliciting proposals for a 2011 Scout mission.

The Phoenix proposal, selected in 2003, saves expense by using a lander structure, subsystem components and protective aeroshell originally built for a 2001 lander mission that was canceled while in development. The budget for the Phoenix mission, including launch, is $386 million.

The spacecraft will land using descent thrusters just prior to touchdown, rather than airbags like those used by the current Mars Exploration Rovers. As Phoenix parachutes through Mars' lower atmosphere in May 2008, a descent camera will take images for providing geological context about the landing site.

The robotic arm being built for Phoenix will be about 2 meters (7 feet) long, jointed at the elbow and wrist, and equipped with a camera and scoop. It will dig as deep as about 50 centimeters (20 inches) and deliver samples to instruments on the spacecraft deck that will analyze physical and chemical properties of the ices and other materials. A stereo color camera will examine the landing site's terrain and provide positioning information for the arm. The Canadian Space Agency is providing a suite of weather instruments for Phoenix.

'The propulsion system and the wiring harness have been added to the vehicle,' said Ed Sedivy, Phoenix program manager for Lockheed Martin. 'We will be loading flight software onto the flight computer in the next few days. The flight software is much more mature than typical for a planetary program at this stage. As soon as the flight computer is mated up, we can apply external power to the vehicle.'

Navigation components, such as star trackers, and communication subsystems will become part of the spacecraft in coming weeks, followed by science instruments in the summer.

Phoenix will be shipped to NASA's Kennedy Space Center, Florida, in May 2007, for final preparations leading up to launch. Before that, testing in Colorado will subject the spacecraft to expected operational environments. This includes thermal and vacuum tests simulating the 10-month trip to Mars and conditions on Mars' surface. Meanwhile, the mission is preparing a test facility in Tucson for practicing and testing procedures for operating the spacecraft on Mars.