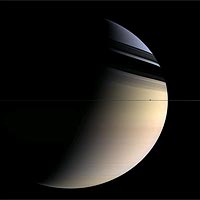 Shadows of rings fall on Saturn. The moon Enceladus is visible right of center in the ringplane.

We all know Earth rotates every 24 hours, but scientists have long had difficulty pinpointing how long the day is on Saturn. The magnetometer onboard the Cassini spacecraft has, for the first time ever, measured a periodic signal in Saturn's magnetic field, key information to finally understanding the length of a Saturn day and the evolution of this gaseous planet.

The latest research suggests a Saturn day is 10 hours, 47 minutes, 6 seconds (plus or minus 40 seconds). That's 8 minutes slower than NASA Voyager results from the early 1980s, and slower than previous estimates from another Cassini instrument. The magnetometer results provide the best estimate of the Saturn day to date, because it can see deep inside Saturn. These Cassini results are in the May 4 issue of the journal Nature.

'Measuring the rotation period of a rocky planet like Earth is easy, but measurements for planets made of gas, such as Saturn, pose problems,' said the lead author of the paper, Dr. Giacomo Giampieri, a researcher at NASA's Jet Propulsion Laboratory, Pasadena, Calif.

Planets rotate around their 'spin' axes as they orbit about the sun. Rocky planets like Earth and Mars have rotation periods that are easy to measure because we can see surface features as they go by, such as the continents as viewed from space. Gaseous planets do not have a solid surface to track.

The magnetic field is generated deep inside Saturn's liquid metallic core by flowing electric currents. By measuring the field, researchers can determine the length of the day on Saturn.

'Making this measurement has been one of the most important science goals for the mission,' said Professor Michele Dougherty of Imperial College London. 'Finding a distinct periodic rhythm in the magnetic field helps us understand the internal structure of Saturn that in turn will help us understand how it formed.'

Knowing the length of a day or how fast the planet rotates is critical to understanding the internal structure of the planet and modelling the weather patterns on Saturn.

On approach to Saturn, Cassini's radio and plasma wave instrument measured radio signals and predicted that the day on Saturn was 10 hours, 45 minutes, 45 seconds. That was considered a very good estimate at the time.

Since the Voyager days scientists have been seeing changes in the period of radio observations. They knew that it was virtually impossible to slow down or speed up a mass as large as Saturn. As Cassini's measurements of the rhythms of natural radio signals from the planet continued to vary, scientists began to realize these signals were probably not a direct measurement of the internal rotation rate. Suddenly the length of Saturn's day became uncertain. Measurements of the magnetic field help scientists 'see' deep inside Saturn and may have finally solved this puzzle.

'Our magnetic field measurements have remained constant since Cassini entered orbit almost two years ago, while radio measurements since the Voyager era have shown large variability. By monitoring the magnetic field over the rest of the mission, we will be able to solve this puzzle,' Giampieri.

In addition to Giampieri the other authors are: Michele Dougherty, from Imperial College, London; Edward Smith also from JPL; and Christopher Russell from the University of California, Los Angeles.

The Cassini-Huygens mission is a cooperative project of NASA, the European Space Agency and the Italian Space Agency. The Jet Propulsion Laboratory, a division of the California Institute of Technology in Pasadena, manages the Cassini-Huygens mission for NASA's Science Mission Directorate, Washington. The Cassini orbiter was designed, developed and assembled at JPL. The magnetometer team is based at Imperial College in London, working with team members from the United States and several European countries.