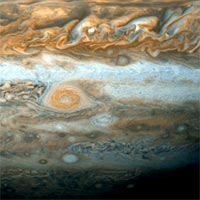 This image, acquired April 8, 2006 with Hubble's Advanced Camera for Surveys (high-resolution channel), shows that the second red spot has a small amount of pale clouds in the center. A strong convective event, which is likely a thunderstorm, is visible as a bright white cloud north of the oval, in the turbulent clouds that precede the Great Red Spot. As the oval continues its eastward drift and the Great Red Spot moves westward, they should pass each other in early July. This contrast-enhanced image was taken in blue and red light. The group that performed this observation was led by Amy Simon-Miller (NASA Goddard Space Flight Center), Glenn Orton (Jet Propulsion Laboratory) and Nancy Chanover (New Mexico State University).

NASA's Hubble Space Telescope is giving astronomers their most detailed view yet of a second red spot emerging on Jupiter. For the first time in history, astronomers have witnessed the birth of a new red spot on the giant planet, which is located half a billion miles away. The storm is roughly one-half the diameter of its bigger and legendary cousin, the Great Red Spot. Researchers suggest that the new spot may be related to a possible major climate change in Jupiter's atmosphere.

Dubbed by some astronomers as "Red Spot Jr.," the new spot has been followed by amateur and professional astronomers for the past few months. But Hubble's new images provide a level of detail comparable to that achieved by NASA's Voyager 1 and 2 spacecraft as they flew by Jupiter a quarter-century ago.

Before it mysteriously changed to the same color as the Great Red Spot, the smaller spot was known as the White Oval BA. It formed after three white oval-shaped storms merged during 1998 to 2000. At least one or two of the progenitor white ovals can be traced back to 90 years ago, but they may have been present earlier. A third spot appeared in 1939. (The Great Red Spot has been visible for the past 400 years, ever since earthbound observers had telescopes to see it).

When viewed at near-infrared wavelengths (specifically 892 nanometers — a methane gas absorption band) Red Spot Jr. is about as prominent in Jupiter's cloudy atmosphere as the Great Red Spot. This may mean that the storm rises miles above the top of the main cloud deck on Jupiter just as its larger cousin is thought to do. Some astronomers think the red hue could be produced as the spots dredge up material from deeper in Jupiter's atmosphere, which is then chemically altered by the Sun's ultraviolet light.

Researchers think the Hubble images may provide evidence that Jupiter is in the midst of a global climate change that will alter its average temperature at some latitudes by as much as 10 degrees Fahrenheit. The transfer of heat from the equator to the planet's south pole is predicted to nearly shut off at 34 degrees southern latitude, the latitude where the second red spot is forming. The effects of the shut-off were predicted by Philip Marcus of the University of California, Berkeley (UCB) to become apparent approximately seven years after the White Oval collisions in 1998 to 2000.