Light's Most Exotic Trick Yet: So Fast it Goes ... Backwards? 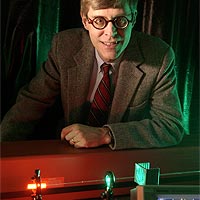 In the past few years, scientists have found ways to make light go both faster and slower than its usual speed limit, but now researchers at the University of Rochester have published a paper today in Science on how they've gone one step further: pushing light into reverse. As if to defy common sense, the backward-moving pulse of light travels faster than light.

Confused? You're not alone.

'I've had some of the world's experts scratching their heads over this one,' says Robert Boyd, the M. Parker Givens Professor of Optics at the University of Rochester. 'Theory predicted that we could send light backwards, but nobody knew if the theory would hold up or even if it could be observed in laboratory conditions.'

Boyd recently showed how he can slow down a pulse of light to slower than an airplane, or speed it up faster than its breakneck pace, using exotic techniques and materials. But he's now taken what was once just a mathematical oddity—negative speed—and shown it working in the real world.

'It's weird stuff,' says Boyd. 'We sent a pulse through an optical fiber, and before its peak even entered the fiber, it was exiting the other end. Through experiments we were able to see that the pulse inside the fiber was actually moving backward, linking the input and output pulses.'

So, wouldn't Einstein shake a finger at all these strange goings-on? After all, this seems to violate Einstein's sacred tenet that nothing can travel faster than the speed of light.

'Einstein said information can't travel faster than light, and in this case, as with all fast-light experiments, no information is truly moving faster than light,' says Boyd. 'The pulse of light is shaped like a hump with a peak and long leading and trailing edges. The leading edge carries with it all the information about the pulse and enters the fiber first. By the time the peak enters the fiber, the leading edge is already well ahead, exiting. From the information in that leading edge, the fiber essentially 'reconstructs' the pulse at the far end, sending one version out the fiber, and another backward toward the beginning of the fiber.'

Boyd is already working on ways to see what will happen if he can design a pulse without a leading edge. Einstein says the entire faster-than-light and reverse-light phenomena will disappear. Boyd is eager to put Einstein to the test.

So How Does Light Go Backwards?

Boyd, along with Rochester graduate students George M. Gehring and Aaron Schweinsberg, and undergraduates Christopher Barsi of Manhattan College and Natalie Kostinski of the University of Michigan, sent a burst of laser light through an optical fiber that had been laced with the element erbium. As the pulse exited the laser, it was split into two. One pulse went into the erbium fiber and the second traveled along undisturbed as a reference. The peak of the pulse emerged from the other end of the fiber before the peak entered the front of the fiber, and well ahead of the peak of the reference pulse.

To understand how light's speed can be manipulated, think of a funhouse mirror that makes you look fatter. As you first walk by the mirror, you look normal, but as you pass the curved portion in the center, your reflection stretches, with the far edge seeming to leap ahead of you (the reference walker) for a moment. In the same way, a pulse of light fired through special materials moves at normal speed until it hits the substance, where it is stretched out to reach and exit the material's other side [See 'fast light' animation].

Conversely, if the funhouse mirror were the kind that made you look skinny, your reflection would appear to suddenly squish together, with the leading edge of your reflection slowing as you passed the curved section. Similarly, a light pulse can be made to contract and slow inside a material, exiting the other side much later than it naturally would [See 'slow light' animation].

To visualize Boyd's reverse-traveling light pulse, replace the mirror with a big-screen TV and video camera. As you may have noticed when passing such a display in an electronics store window, as you walk past the camera, your on-screen image appears on the far side of the TV. It walks toward you, passes you in the middle, and continues moving in the opposite direction until it exits the other side of the screen.

A negative-speed pulse of light acts much the same way. As the pulse enters the material, a second pulse appears on the far end of the fiber and flows backward. The reversed pulse not only propagates backward, but it releases a forward pulse out the far end of the fiber. In this way, the pulse that enters the front of the fiber appears out the end almost instantly, apparently traveling faster than the regular speed of light. To use the TV analogy again—it's as if you walked by the shop window, saw your image stepping toward you from the opposite edge of the TV screen, and that TV image of you created a clone at that far edge, walking in the same direction as you, several paces ahead [See 'backward light' animation].

'I know this all sounds weird, but this is the way the world works,' says Boyd.